Breaking News
Home » Tech » NPR One listens to the listeners 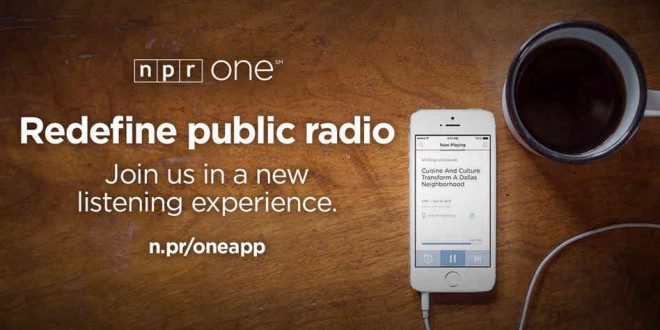 NPR One listens to the listeners

After coming up with NPR News, National Public Radio has launched another way of listening to their feed. NPR One is designed to adapt programmes to suit the listener. While listening, you can mark a story as “interesting”. The more you do this, NPR One will get a better understanding of your preferences and adapt future streams to your profile. Radio consultant James Cridland has said in an interview for TechNewsWorld that “With 268 different NPR members and over 800 stations, this is a really ambitious project, yet it works well.” Still there are some concerns regarding audience fragmentation. As a public radio station, there is a chance for the statistical base to fail in reaching maturity. Not that it matters to the regular user.

NPR One is available for Android and iOS as a free app. The controls are simple and you’ll always know what’s coming up next. It has been recognized that while smart phones and tablets are ubiquitous, these are the best platforms for radio to migrate to. Especially since they can offer the possibility of saving relevant content,  sharing with friends and listening to stations and podcasts based on your current location. Not to mention that you receive the full range of controls such as skipping, rewinding and pausing.

No matter the impediments, radio really needs to keep up with the rest of the pack. As the only rigid media channel left, radio must transform and begin adapting content to the user, otherwise it will most likely fade away. Since NPR News was already on its way to introduce the social aspect to listening, NPR One takes it one step further and provides a model for the 21’st century mobile radio business. So go download it and begin listening. That way maybe we’ll just be able to create the user base they are sorely needing for statistical purposes.

I’m Load The Game’s co-founder and community manager, and whenever I’m not answering questions on social media platforms, I spend my time digging up the latest news and rumors and writing them up. That’s not to say I’m all work and no fun, not at all. If my spare time allows it, I like to engage in some good old fashioned online carnage. If it’s an MMO with swords and lots of PvP, I’m most likely in it. Oh, and if you’re looking to pick a fight in Tekken or Mortal Kombat, I’ll be more than happy to assist! Connect with me by email markjudge (@) loadthegame.com only
@@MarkJudgeLTG
Previous Apple revealed Siri for Mac
Next Apple and Microsoft to be banned by the Chinese government