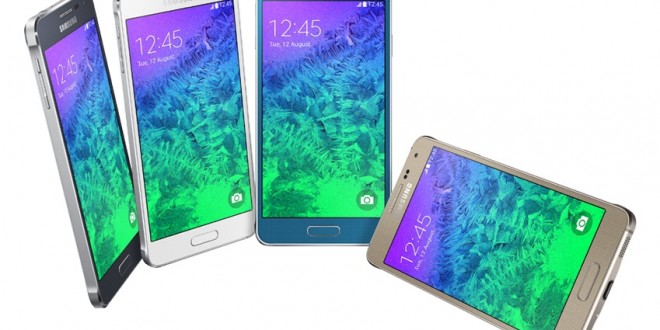 It seems like the rumors were true after all, at least some of them. The Samsung Galaxy Alpha is indeed a real thing, but it will not be officially announced next month at the IFA Trade Show alongside the Samsung Galaxy Note 4 as most believed. Samsung Tomorrow reports that the device has already been unveiled well ahead of the Berlin event. This is actually a very good decision as the handset would have probably fallen under the radar at the IFA. The show will not only serve as the launching pad for the Samsung Galaxy Note 4, but it will also be the place where a host of other devices will be announced including the Nokia Lumia 830.

But let’s get back to the Samsung Galaxy Alpha shall we? The handset is rather similar from a design stand point to the Korean company’s current flagship, the Samsung Galaxy S5. But unlike the S5, the Alpha features a metallic chassis and is only 6.7 mm thick, similar to the iPhone 6, which is said to measure between 6 and 7 mm. Actually, Samsung’s latest device is essentially a competitor for Apple’s upcoming flagship as the Alpha also comes equipped with a 4.7-inch display, just like the smaller iPhone 6. However, the Samsung Galaxy Alpha only features a modest resolution of 720 x 1280 pixels, which is a downgrade from the Galaxy S5 and is also lower than the iPhone 6’s rumored 960 x 1704 resolution.

On the hardware side, the Samsung Galaxy Alpha definitely doesn’t disappoint, but it’s nothing to write home about either. The device comes equipped with an  Exynos 5 octa-core processor comprised of four Cortex A15 cores running at 1.8 GHz and four Cortex A7 cores clocked at 1.3 GHz. Some other specs include 2 GB of RAM, 32GB non-expandable internal storage memory, 12MP primary shooter, 2.1 MP secondary camera, and a pretty small 1.860 mAh battery. The Samsung Galaxy Alpha runs on the Android 4.4.4 KitKat operating system with TouchWiz user interface, which includes S Health and Ultra-low power mode among other features. Current color options include Silver, Blue, Gold, and White

Sources speculate that the device will become available for purchase on September 12th. All signs point at the fact that the Samsung Galaxy Alpha will first launch in Russia and will cost around 25.000 RUB, which is the equivalent of 690 US dollars or 515 EUROs. This is a pretty high price point considering what the handsets offers, but we need to keep in mind that smartphones are generally more expensive in Russia so it may end up being cheaper when it launches in the US and Europe.

I’m Load The Game’s co-founder and community manager, and whenever I’m not answering questions on social media platforms, I spend my time digging up the latest news and rumors and writing them up. That’s not to say I’m all work and no fun, not at all. If my spare time allows it, I like to engage in some good old fashioned online carnage. If it’s an MMO with swords and lots of PvP, I’m most likely in it. Oh, and if you’re looking to pick a fight in Tekken or Mortal Kombat, I’ll be more than happy to assist! Connect with me by email markjudge (@) loadthegame.com only
@@MarkJudgeLTG
Previous Live, die, conquer in Archeage
Next Nexus 6 will run on Android L and sport a Snapdragon 805 according to AnTuTu benchmark