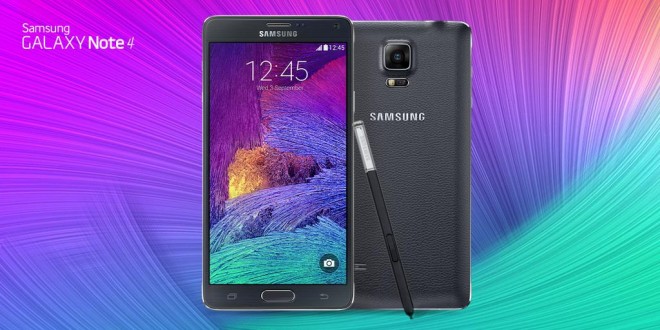 Well boys and girls, the wait is finally over as Samsung officially launched the Samsung Galaxy Note 4 just moments ago. The Korean tech giant went on stage at the IFA Trade Show today in order to unveil their latest products. While the company also talked about several other devices including the newly unveiled Galaxy Note Edge, the fourth generation Note phablet definitely stole the show. Design-wise, the Samsung Galaxy Note 4 is very similar to its predecessor with a few exceptions. Most notable are the metal edges and the slightly curved display. Rumors about the device’s curved display have been rampart these last few months and it seems like they were partially right, but one can barely notice that it’s actually curved so it’s definitely not what most of us expected to see.

In terms of its screen, the Samsung Galaxy Note 4 certainly stands out from the crowd with its 5.7-inch Quad HD Super AMOLED display with 1440 x 2560 resolution and 518 pixel density. The pixel count increased by about 30 percent compared to the Note 3 and the difference is clearly noticeable. Samsung also equipped the phablet with some pretty great cameras to go along with the absolutely stunning display. The Samsung Galaxy Note 4 features a 16 MP primary sensor with Optical Image Stabilization as well as a 3.7 MP secondary camera. There are also quite a number of features and apps available that allow you to make better use of the camera, especially if you plan on taking a lot of selfies with it.

The Samsung Galaxy Note 4 will arrive in two variants, each with its own type of processor. One of them will sport a Qualcomm Snapdragon 805 quad-core Krait 450 CPU running at 2.7 GHz while the other comes equipped with an Exynos 5433 octa-core processor with four cores clocked at 1.3 GHz and four cores running at 1.9 GHz. Other specs include 3 GB of LPDDR3 RAM, 32 GB of internal storage memory with microSD card support good for up to 128 GB of additional memory and Andreno 420/ARM Mali-T760 GPU, depending on the variant. The Samsung Galaxy Note also features a pretty beefy 3220 mAh battery with special features that allow for fast charging and ultra-low battery saving mode. The device naturally comes with the famous S Pen as well, which underwent a number of improvements and offers more versatility this time around.

The Samsung Galaxy Note 4 will launch globally this October in black, white, gold and pink colors, and Android 4.4.4 out of the box. The device will cost €800, which is the equivalent of  about $1050, but we’re not sure if that will be the actual price in the US as it was not announced yet. We’ll let you know as soon as we learn for certain so stay tuned.

I’m Load The Game’s co-founder and community manager, and whenever I’m not answering questions on social media platforms, I spend my time digging up the latest news and rumors and writing them up. That’s not to say I’m all work and no fun, not at all. If my spare time allows it, I like to engage in some good old fashioned online carnage. If it’s an MMO with swords and lots of PvP, I’m most likely in it. Oh, and if you’re looking to pick a fight in Tekken or Mortal Kombat, I’ll be more than happy to assist! Connect with me by email markjudge (@) loadthegame.com only
@@MarkJudgeLTG
Previous Aspire Switch 10 and Switch 11 unveiled by Acer at IFA Berlin
Next Samsung announced their “Gear VR” headset