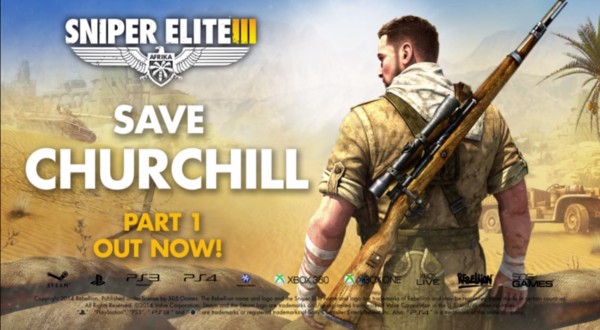 The first part of Sniper Elite 3’s “Save Churchill” DLC has now been released on consoles. The DLC has been available on PC since July, whereas the console version was delayed in order for the developer to improve it. The original “Sniper Elite 3” was released in June 2014 for Playstation 3, Playstation 4, Xbox One, Xbox 360 and Windows PC.

In the “Save Churchill” DLC, players return to Siwa Oasis, the fifth mission of the original campaign. The story of the DLC takes place prior to the 1943 Casablanca Conference. You will get back in the shoes of Karl Fairburne while trying to stop a plot against the British prime minister’s life. The “Churchill” mission can be purchased through a season pass for $29.99. The package contains this campaign, another story, “Hunt the Grey Wolf”, in which you are assigned to kill Hitler, and four weapon packs. Individually, the DLC missions can be bought for $7.99 and the weapon packs for $3.99.

The first episode, “Save Churchill: In the Shadows” is only the beginning of Sniper Elite’s DLC. Episode 2, “Belly of the Beast”, has also been released for PC in August 21st, while the third part is slated for a fall release. According to the developer, Rebellion, who also self-publishes, the game now features co-op. You will be able to play the Churchill DLC either by yourself or in online co-op mode. In “Belly of the Beast”, the scenery changes a little, as the player is sent to the mountains in Nortch Morocco, where the Axis is using a concealed facility to provide Hitler with devastating weapons of war. The facility also produces soldiers, such as Raubvogel, the sniper sent to kill the British Prime Minister. You, as Karl Fairburne, have to make sure that the weapons the nazis are building never leave the facility.

Tags churchill dlc in the shadows Save Churchill Sniper Elite 3

I'm a journalism graduate and an occasional gamer. As a kid I used to own a NES clone called "Terminator 2", which was hugely popular in my country. I like old school games and adventure games but I occasionaly play RPG's and Shooters as well, though I wouldn't call myself an expert at these kinds of games. When I'm not writing or playing games I prefer reading detective or fantasy novels.
Previous Xbox Live Gold members can play Forza Motorsport 5 for free during upcoming weekend
Next Dragon Age Inquisition takes about 80 hours to complete on a regular playthrough

Save Winston Churchill in the latest Sniper Elite 3 DLC