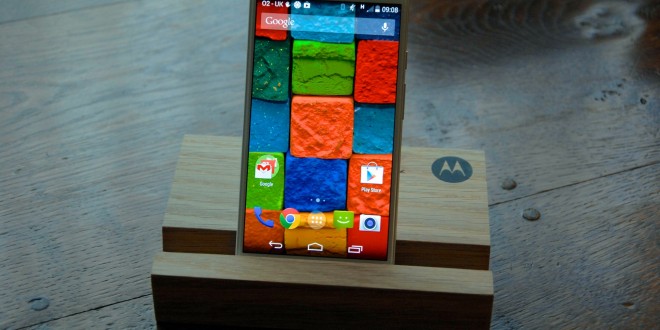 Motorola revealed their brand new flagship smartphone earlier today at the IFA Trade Show. It was generally believed that the device would go by the name of Moto X+1, but it turns out that Motorola went with the name Moto X yet again. This updated 2014 edition improves over its predecessor in pretty much every way except for the design, which is more or less similar. But why ruin a good thing, right? However, Motorola did incorporate an aluminum frame this around and that was a great decision as it does work very well with the leather back cover. The wood option is also available again and you can further customize the Moto X through the already famous Moto Maker, which was updated as well.

We’re now looking at a 5.2-inch 1080p resolution AMOLED display with 423 pixels per inch and Corning Gorilla Glass  protection. A quick peak under the hood reveals a Qualcomm Snapdragon 801 quad-core processor clocked at 2.5 GHz with Adreno 33o GPU and 2 GB of RAM. Moto X’s other specs include 13MP rear-facing camera with dual-LED, 2,300 mAh battery and 16GB/32GB internal storage memory options with no microSD support. The Moto X measures 140.8 mm x 72.4 mm x 9.9 mm, weighs 144 grams and runs on the Android 4.4.4 operating system complete with a few exclusive features.You will be able to purchase the Moto X starting later this month in the United States, UK, France, Germany and a number of other markets of the price of $499 unlocked or $99 on a two-year contract with AT&T or Verizon.

Aside from the updated Moto X, Motorola also announced an updated versions of the Moto G smartphone. The device features lower specs than the Moto X, but is definitely an improvement over its predecessor and can be purchased starting today for the ridiculously cheap price of $179.99 without a contract. The 2014 edition of the Moto G sports a 5-inch 720p resolution screen complete with Gorilla Glass protection. Hardware-wise, the handset features a Qualcomm Snapdragon 400 quad-core CPU running a 1.2 GHz, Adreno 305 GPU and 1 GB of RAM. This budget device also comes equipped with an 8 MP primary camera, 2,070 battery and 8GB/16GB internal storage options with microSD support. The Moto G weighs  149 grams, measures 141.5 mm x 70.7 mm x 11 mm and runs on Android 4.4.4 KitKat.

Motorola is said to upgrade both the new Moto X and the new Moto G to the Android L operating system once the final build is released. The OS will launch later this year, but a specific date was not announced yet. Stay tuned for more news and updates.

I’m Load The Game’s co-founder and community manager, and whenever I’m not answering questions on social media platforms, I spend my time digging up the latest news and rumors and writing them up. That’s not to say I’m all work and no fun, not at all. If my spare time allows it, I like to engage in some good old fashioned online carnage. If it’s an MMO with swords and lots of PvP, I’m most likely in it. Oh, and if you’re looking to pick a fight in Tekken or Mortal Kombat, I’ll be more than happy to assist! Connect with me by email markjudge (@) loadthegame.com only
@@MarkJudgeLTG
Previous Moto x+1 and Moto G full specs appear
Next Hearthstone will receive more than 100 new cards says Blizzard