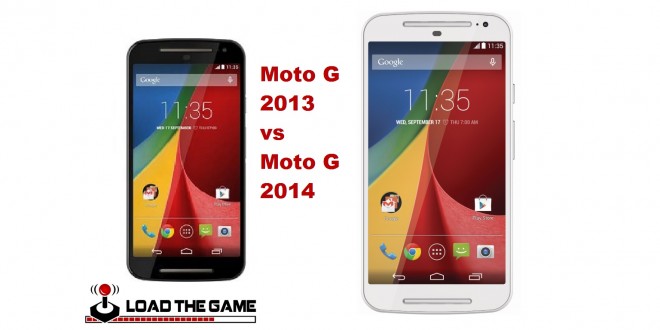 Motorola has just launched the Moto G 2014 at IFA Berlin as the little brother of the Moto X. The Moto X and Moto Hint will both be available for purchase starting Tuesday, September 6, but you can already purchase the new Moto G from Motorola now. Although Global GSM versions of the new Moto G are already sold out, both the White and Black versions of the mid-range budget smartphone are available in the US GSM category.

The Moto G is notable for its low price and fairly good specs and was quite the hit among costumers the past year. The smartphone offered mid-range specs for an acceptable price of $130. The Moto G competed for the title of best budget smartphone against the Sony Xperia SP, BlackBerry Z10, Nokia Lumia 520, Nexus 5, HTC Desire C, Sony Xperia U and Huawei Ascend G330.

The question on many peoples’ minds is how does the Moto G 2014 differ from its predecessor, the Moto G. People are wondering whether there are many improvements and features added to the new Moto G compared to its predecessor and whether upgrading from the initial Moto G is worth the hassle. In this article, I will try to point out all the major differences between the current Moto G and its predecessor.

First off, the new Moto G sports a 5 inch IPS LCD screen with 720*1280 resolution and 294ppi pixel density, which is a bigger screen compared to its predecessor, but when it comes to resolution, both the Moto G and its predecessor have the same resolution, meaning that the pixel density on the new Moto G is lower than on the original one. Both Moto G devices are protected by Corning Gorilla Glass 3, have 1 GB RAM, either 8 or 16 GB internal storage, the difference being that the new Moto G has been equipped with a microSD card slot making storage space expandable to 32 GB.

The camera on the 2014 Moto G has been upgraded as well, jumping from the original 5 MP to 8 MP on the rear camera, and from 1.3 MP to 2 MP on the front camera. Whilst the original Moto G came with Android 4.3 Jelly Bean, the new version of the smartphone comes with Android 4.4.4 KitKat out of the box and will be upgradable to Android L, which is a feature most will find pretty attractive.

Both versions of the Moto G are powered by a Snapdragon 400 CPU clocked at 1.2 GHz coupled with an Adreno 305 GPU. A gyroscope has been added to the new Moto G, alongside the accelerometer, proximity sensor and compass its predecessor already had. The battery is the same in both smartphones, a 2070 mAH non-removable Li-Lon battery.

The new Moto G has front facing speakers, whilst the old one had just a speaker on the back of the phone and the new version of Motorola’s budget phone is also thinner than the old one. At the same time. Motorola chose to keep the design of the original Moto G and I think that was the right choice to make. The new Moto G is available at Motorola for $179.99.

You can see, that there aren’t many differences between the two Moto G editions, but those minimal changes that do stand out, make the phone the better choice. The camera is much better on the new Moto G than on its predecessor, and the dual front facing speakers do offer a higher quality sound (not BoomSound, though) and it does sport a bigger screen and a microSD slot. If you are on a budget and you are thinking of upgrading a low-end phone to a mid-range one, the new Moto G should definitely be among your top choices because it does offer good quality performance for a low price.

My life-long dream has been to test out every gadget on the market! Considering the fact that I've rapidly destroyed almost every gadget I've had so far, I'm not inclined to owning something, so my ideal outcome would be to have a different gadget each month. I'm really into smartphones, wearables and tablets and I love Playstation and Xbox, I'm sure I'll beat you at your own game (after a month of training... or two)
Previous BlackBerry Passport vs. Nexus 6: anticipated or overhyped
Next iPhone 6 pre-orders delayed by a few days

Having the latest version of Android on your smartphone does not always guarantee a pleasant ...