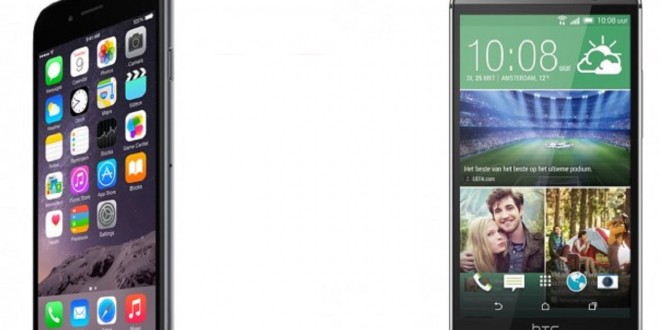 Two major companies have been all the news lately, one for its newly announced product line and the other for a great smartphone that still stays at the top of flagships for this year. Nonetheless, this second company might be heading downhill because of low revenues. In any case, the two companies we are talking about are Apple and  HTC. Apple has come out with the iPhone 6, iPhone 6 Plus, Apple Watch and the Pay and HealthKit platforms.

The iPhone 6 and iPhone 6 Plus are already sold out, with customers and Apple fans jumping at the opportunity of pre-ordering the new additions to the Apple smartphone line. That means that many who didn’t get the chance to pre-order the iPhone 6 or 6 Plus get a second chance at rethinking their choice. Not that the iPhone 6 or 6 Plus is necessarily a bad choice, but since you’ve missed out on the first batch of iPhones, you should at least take the time to consider HTC’s One M8 flagship, a phone that is considered by many to be the best of the best in the year 2014.

The HTC One M8 was launched in March, and ever since many have continuously said that it is a top notch smartphone for an acceptable price. It rivals the likes of the Samsung Galaxy S5, Sony Xperia Z2 and even the Xperia Z3. The One M8 packs a 5 inch Super LCD3 1080*1920 resolution 441 ppi display, protected by Corning Gorilla Glass 3 and runs on Android 4.4 KitKat with Sense 6 UI on top. The iPhone 6 has a 4.7 inch 750*1334 resolution 326 ppi shatter proof glass display protected by an oleophobic coating, whilst the iPhone 6 Plus has a 5.5 inch IPS LCS 1080*1920 resolution 401 ppi shatter proof glass display with the same type of protection. Both the iPhone 6 and 6 Plus run on iOS 7, pgradable to iOS 8.

The iPhone 6 and 6 Plus both pack a fingerprint sensor, NFC and the Apple Pay platform, loudspeakers and no microSD card slot. The HTC One M8 has NFC and Boom Sound front facing dual stereo speakers and a microSD card with up to 128 GB support. The One M8 is powered by a quad core Snapdragon 801 CPU clocked at 2.3 GHz and Adreno 330 GPU, backed by 2 GB RAM and either 16 or 32 GB internal storage. The iPhone 6 and 6 Plus are both powered by Apple’s dual core 1.4 GHz Cyclone A8 CPU and PowerVR GX6650 GPU, the iPhone 6 backed by 1 GB RAM, whilst the iPhone 6 Plus boasts with 2 GB RAM with both iPhones available in 16, 64 and 128 GB storage configurations.

The camera on the HTC One M8 is a 4 Ultrapixel sensor which works pretty good according to most reviewers, even in low-light conditions and a 5 MP front shooter. The iPhone 6 and 6 Plus have 8 MP rear cameras and 1.2 MP front cameras. Even though the MP count on the iPhone 6 and 6 Plus doesn’t seem like much compared to other flagships like the Sony Xperia Z3, Galasy S5, Galaxy Note 4 and Note Edge, there aren’t any camera samples yet, so this part of the comparison should at best be called inconclusive.

With all the most important differences listed, the question of whether to go with Apple’s iteration or HTC’s iteration of the best flagship remains. One of the most differentiating things about these phones is actually the OEM. If you choose iPhone 6, you’ll be locked into Apple’s ecosystem, which might not be a bad things for some of you, but for those of you used to the Android experience which lets you do pretty much anything you want with your phones, it might not sit well. HTC on the other hand is praised not only for the premium design and specs of the One M8, but for the Sense 6 UI and durable build of the phone. Price-wise, the HTC One M8 would be the cheaper choices, unless you want to be constrained to 16 GB of storage space with the cheapest version of the iPhone 6.

Recent benchmarks of the iPhone 6 have revealed that performance-wise, the iPhone 6 mostly remains where the iPhone 5s was when it was launched, which is not a good sign, indicating that the A8 chip might not be as powerful as most of us hoped it would be. Nonetheless, I consider the iPhone 6 and 6 Plus nice smartphones with premium design, but I wouldn’t choose either of them over the HTC One M8 because of OS, build, ecosystem and price. Which of these three flagships would you choose and why? Do you think Apple made the right choices when developing the new iPhone 6 and 6 Plus? Do you think HTC is a plummeting company the One M8 will not be able to save? Do you agree with most reviewers out there that the One M8 is the best smartphone on the market?

My life-long dream has been to test out every gadget on the market! Considering the fact that I've rapidly destroyed almost every gadget I've had so far, I'm not inclined to owning something, so my ideal outcome would be to have a different gadget each month. I'm really into smartphones, wearables and tablets and I love Playstation and Xbox, I'm sure I'll beat you at your own game (after a month of training... or two)
Previous Ubisoft teases Far Cry 4 elephants
Next Android productivity apps – must have