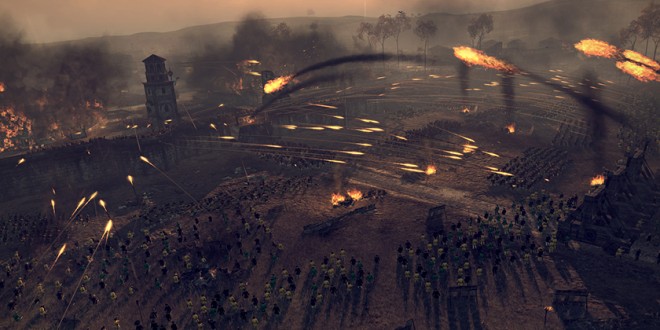 Good things will always come from the partnership of Creative Assembly and SEGA. With Alien: Isolation finally good to go for next month, they announced a new upcoming title, Total War: Attila from the notorious Total War strategy series. The storyline of this sequel presents a grim outlook of a world struck by famine, disease and war, where a new empire is dawning from the far East. Total War: Attila will take players back to the Dark Ages somewhere around 395 AD, in times where God will be unleashing his wrath on the world. You will take part in this apocalyptic setting on the side of the Roman Empire in its historic battles with the Barbarian hordes.

“How far will you go to survive? Will you sweep oppression from the world and carve out a barbarian or Eastern kingdom of your own? Or will you brace against the coming storm as the last remnants of the Roman Empire, in the ultimate survival-strategy challenge? The Scourge of God is coming. Your World will burn.” The game introduces new features such as “Apocalyptic destruction mechanics” – the new raze mechanic will allow you to make use of the mighty firepower your army possesses to blaze entire buildings and sow fear among your enemies, or disable entire cities and regions from your campaign map. The “Legendary start position” will challenge you to keep control of your vast territories, as you will be affected by internal political disputes and constant enemy threats.

Creative Assemblies have implemented new overhauled game mechanics for Total War: Attila. We will enjoy optimized core gameplay and UI, as well as modified in-game features including politics, family tree, civic management and technological progression. The new Incredible period detail developers are planning to introduce will offer players an authentic experience through the period-specific arms and armaments, religion, culture and social upheaval. Finally, Total War: Attila will feature significant improvements and optimizations in overall graphic detail. “With breath-taking scale, atmosphere and improved graphical performance, witness the end of days and the rise of a legend.” The game will be released on February 2015, exclusively on PC. Watch the Total War: Attila debut trailer below:

I'm Razvan, a sports and first-person shooter enthusiast. I've always loved writing, even more so when it involves games. When I'm not playing on my PS3 or writing, I like to run exhausting cardio workouts, play soccer, watch a good movie, or read a good book.
Previous Seek thermal camera allows heat vision on your phone
Next Sleeping Dogs: Enhanced Edition’s first gameplay trailer is here