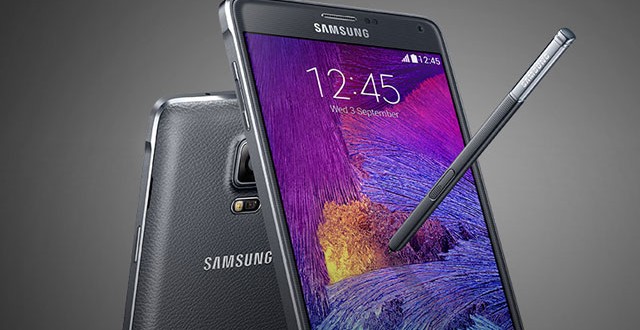 Sprint announced that it is taking pre-order for the Samsung Galaxy Note 4, which means that all four major US carriers are now allowing customers to reserve the device before its official October 17th launch. The fourth generation Note phablet costs $349 on a two-year contract at Sprint or you can get it unlocked for the price of $720. Sprint is also offering its customers a way of buying a Samsung Galaxy Note 4 by only paying $30 a month for 24 months via the Sprint Easy Pay system. The carrier currently has in stock the Charcoal Black and Frosted White models.

The Samsung Galaxy Note 4 was finally announced and detailed earlier this month during the IFA Trade Show and quickly became one of the most highly praised smartphones of the year. Some have even said that the device features the best performing smartphone display ever. Samsung’s latest flagship comes equipped with a 5.7-inch Super AMOLED display with 1440 x 2560 resolution and 518 pixel density. Hardware-wise, the Samsung Galaxy Note 4 is equally impressive as it packs a Qualcomm Snapdragon 805 quad-core processor clocked at 2.7 GHz with Adreno 420 GPU and 3 GB of RAM. Other specs include 16 MP primary camera, 3.7 MP secondary shooter, 32 GB of internal storage memory and a huge 3,220 mAh battery. Currently there isn’t a Samsung Galaxy Note 4 model that features more than 32 GB of storage memory, but the device has a microSD card slot which allows for up to 128 GB of additional storage.

As for the operating system, the Samsung Galaxy Note 4 runs on Android 4.4.4 KitKat straight out of the box. However, Samsung has expressed its desire to have its latest phablet run on the Android L as soon as possible. This may take a while though, as Google still hasn’t revealed the launch date for the final build. Rumor has it that Android L will finally arrive in early November, possibly even on the 1st.

I’m Load The Game’s co-founder and community manager, and whenever I’m not answering questions on social media platforms, I spend my time digging up the latest news and rumors and writing them up. That’s not to say I’m all work and no fun, not at all. If my spare time allows it, I like to engage in some good old fashioned online carnage. If it’s an MMO with swords and lots of PvP, I’m most likely in it. Oh, and if you’re looking to pick a fight in Tekken or Mortal Kombat, I’ll be more than happy to assist! Connect with me by email markjudge (@) loadthegame.com only
@@MarkJudgeLTG
Previous Sony Xperia Z3 vs Sony Xperia Z3 Compact
Next Play Eve Online free for one month and get three free games by signing up to Green Man Gaming