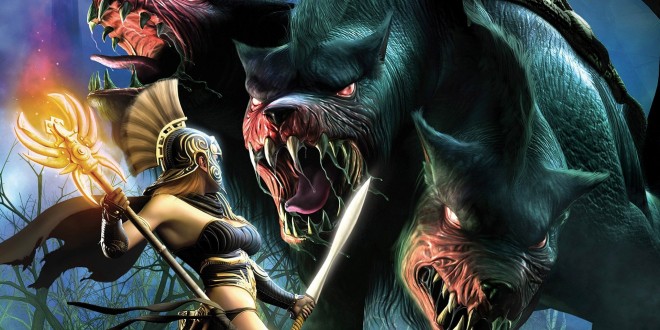 Back when Titan Quest was first released (more than eight years ago!), I didn’t pay much attention to it. I still remember how some of my friends were excited about it even after 20 hours in, but I continued to shrug it off as yet another Diablo II clone. A few days ago, I sold some of my Steam trading cards and noticed that I had managed to make enough dough for both Titan Quest and its expansion, The Immortal Throne. I thought “Ah, what the hell; let’s go for a few rounds”. To my surprise, I almost instantly fell in love with the game’s action, lore, and overall art-style. Because of this, here are seven reasons why everyone should give this one a chance, especially if they’re fans of the hack-and-slash A-RPG genre.

The ancient mythology is different… and totally awesome

Titan Quest’s story is all about you trying to get rid of these unknown monsters whom are besieging Greece. Throughout the game’s story, you’ll stroll across Greece’s hills, beaches, fishing villages, in addition to Egypt – visiting places like Giza and the Nile – and the Silk Road – stopping along the way to visit the Hanging Gardens of Babylon, the Himalayas, and even the Great Wall of China. It’s honestly a refreshing change of pace from the usual high-fantasy theme featuring elves, goblins etc. that most role-playing games throw at us. Additionally, Titan Quest features a large variation when it comes to enemies. Greece has the all-too-common giant spiders, zombies, and skeletons, while also adding centaurs, harpies, and local fauna like boars and crows. Other regions feature, among many other, yetis, myrmidons, and even the Terracotta army.

A simple yet effective approach to the RPG system

I’m particularly liking the simplistic approach to the role-playing system. Each created character features five attributes, which range from his/her health, mana, strength, to dexterity and intelligence; additionally, after first levelling-up, you are able to choose between six classes (e.g. tank, melee-focused, range-focused, necromancer etc.), each one featuring further improvements and skills to invest into. For example, one such skill allowed me to set my enemies on fire with each successfully-pointed arrow. As I usually like to put a distance between me and my foes, I went for the ranger class, opting to defeat all forthcoming monsters with the aid of a bow. At level eight, you are allowed to choose an additional class to master. Additionally, trinkets found throughout your adventures can be imbued into weapons and armours for extra damage and defence, respectively.

This being a hack-and-slash A-RPG, Titan Quest’s main attraction is getting better and better loot as you advance into the storyline. This can be done either by randomly killing monsters (although it still baffles me when I see spiders dropping gold), or by taking on the slew of side-missions not related to the campaign, which usually come in the form of rescuing someone, procuring a certain time, or clearing a certain cave/temple for different purposes. But, for the most part, exploration is your dearest ally when it comes to upgrading your gear.

Another great thing about Titan Quest is the fact that it features absolutely no loading-times between camps, caves, temples etc., creating the illusion of a single, giant adventure. The only exception would be going from one act to another, the first one being Greece, then comes Egypt, and finally – the Silk Road.

The graphics are still holding-up to today’s standards

Titan Quest’s presentation has held-up surprisingly well for this day-and-age. The graphics include sharp textures and pretty smooth animations, and the often-ominous but sometimes-peaceful soundtrack a pure delight to listen to. The game’s day-and-night cycle and lightning deserve a special shout-out, in particular.

Titan Quest can also be experienced with up to five other players. Unfortunately, this being a fairly-old game, I couldn’t find anyone else to share my adventures with. In addition to that, the game also supports mods, which further extend its replay-value. I hear there’s one particular fan-made project called Lilith: The Will of Demon which adds no less than 150 hours of gameplay, which is crazy given the fact that the base-game alone can take you up to 100 hours to complete. There’s also a Camera Mod Collection, which allows camera-rotation and a slightly wider field of view, if required.

Besides the three acts found in the original game, for a very small price, players can get access to a fourth act, which sees them battling Hades in the Underworld. The Immortal Throne features new monsters, items, and improvements to the game’s graphics, in addition to about 30 new quests, and a PvP mode. Of course, this being a hack-and-slash game, the level-cap. has also been raised.

After THQ’s closing (R.I.P.), publisher Nordic Games had bought the rights to the Titan Quest I.P. Does it intend to make a new entry in the series? Who knows, really. I personally think that after all this time, Nordic should reboot the entire franchise. Yes, the series is practically composed of only one game, but hey, EA is doing the same with Mirror’s Edge, so why not? Finger crossed we’ll see something in the future. After all, why buy it if you’re not interested, right? You can check out Titan Quest via Steam.

I’m Load The Game’s co-founder and community manager, and whenever I’m not answering questions on social media platforms, I spend my time digging up the latest news and rumors and writing them up. That’s not to say I’m all work and no fun, not at all. If my spare time allows it, I like to engage in some good old fashioned online carnage. If it’s an MMO with swords and lots of PvP, I’m most likely in it. Oh, and if you’re looking to pick a fight in Tekken or Mortal Kombat, I’ll be more than happy to assist! Connect with me by email markjudge (@) loadthegame.com only
@@MarkJudgeLTG
Previous Windows 9 will come free for Windows 8 users
Next Indie developer releases iPong, a reboot of the Atari classic

Pay what you want for Darksiders, Titan Quest, Spellforce 2 and more with the Nordic Games Humble Bundle

Another week, another Humble Weekly Bundle. This time around we’ve got no less than 13 ...