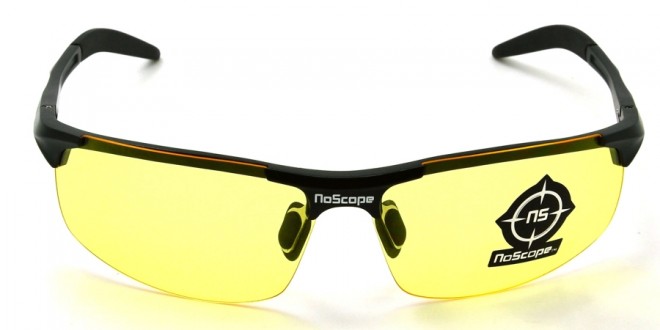 NoScope Hydra and Orion Gaming Glasses Reviewed – A thorn in Gunnar’s side?

With the ever-growing eSports phenomenon, we’ve grown accustomed to seeing professional gamers wearing those signature yellow glasses during extended playing sessions. Those glasses are the well-known Gunnars, glasses that promise to keep your eyes safe and stress-free during long exposure to computer screens, LCD or otherwise. But no market should suffer from a monopoly, and this is where the guys at NoScope come in. While they are certainly less known on the gaming peripheral market, their philosophy is simple – bringing protective eye-wear to gamers all around the world, at an affordable price.

Today, we’ll be looking at two of their signature models, mainly the NoScope Hydra and the NoScope Orion, glasses with similar purposes but quite different designs. Let’s get this out of the way from the very beginning – NoScope glasses are first and foremost affordable. Where the cheapest pair of Gunnars will set you back $69.00 (with the DESMO or SCOPE going up to $99.00), the NoScope Hydra costs as low as $29.99, with the Orion bringing even more value to the table at $19.99. Naturally, poor quality would come to mind, considering the significant price difference. Is this the case? No, not by a longshot.

We’ve been using the NoScope Hydra and Orion for quite a few days now, and we’ve been more than pleased with them. You’ll notice that I often make parallels between them and the more hefty Gunnars – this is because the Gunnars are the reference name on the market (at least for now), and because I’ve had extensive experience with the Gunnar Vayper. Unfortunately, the Vayper simply didn’t work its magic for me personally. That’s the thing with Gunnars – it can either be a huge help in reducing eye-strain, or it can do the exact opposite, as was my case. As my eye-sight is still excellent (despite staring at screens for over two decades now), I simply could not adjust to the slight magnification effect of the Gunnars, and after extended use, they would end up giving me quite the headache. This is NOT the case with the NoScope Hydra (the model I’ve tested most extensively). The Hydra stands out by having absolutely no magnification effect whatsoever. This means that even after wearing them for 8+ hours, I’ve felt no discomfort, no dried out eyes and no headaches.

Now, I’m no certified doctor, so I’ll have to rely on personal experience here, but the Hydra actually feels good to me. Staring at screens was never a real issue for me personally, but I have to admit, wearing the Hydras does ease the strain on my eyes considerably, and the same positive results have been reported by the rest of our editorial staff. Thus, NoScopes are definitely on the right track here. Moving on, the Hydra is exceptionally well built, especially considering its price. I was expecting a flimsy frame that would bend easily, but the glasses come with a surprisingly sturdy metal frame, at least where the Hydra is concerned. The Orion comes with a thinner metallic frame that somehow feels less sturdy, but that comes with the benefit of being more comfortable when paired with headphones.

And this brings me to the only downside of the NoScope Hydra glasses – comfort. While the glasses are perfectly comfortable to wear by themselves, the Hydra can become uncomfortable when paired with a tight pair of headphones. If you’re using headphones that are extremely tight on the ears, the Hydra could prove to be a discomfort after 4 or 5 hours. Still, this is only to be expected, and it’s a minor nuisance. The Orion, having a thinner metal frame, proves to be a lot more comfortable with headphones – basically, you won’t really feel you’re wearing them. Thus, if you’re playing a lot with headphones on, we recommend you take a look at the NoScope Orion, while if you prefer using speakers or aren’t planning on wearing tight headphones for extended periods of time, you should definitely consider the Hydra.

Diving further into the design side of things, both models are extremely light-weight, so there’s no pressure on your nose or ears. The Hydra comes with sidebands that don’t wrap around your ear, so unless you have large headphones applying pressure, you won’t really feel them on. It also looks really cool. Then again, so does the Orion, which, apart from the specific yellow-tinted lenses it comes with, looks exactly like a pair of aviator sunglasses. And you can’t really go wrong with some aviators, can you? This comes down to a matter of taste, but both the Hydra and the Orion should please you in regard of how they look.

All in all, it’s safe to say that the NoScope glasses work. We’ve gone for extended gaming sessions with and without them to see if there were any noticeable differences, and we’ve definitely experienced pleasant results using them. You blink less and your eyes don’t dry out or turn red as easily, and that’s exactly what you’re getting them for. Gamer or no gamer, if you’re spending several hours in front of a computer on a daily basis, consider picking up a pair of these. They’re extremely affordable (proving that they deliver the same results as Gunnar Optiks, at a fraction of a cost), and even come with a quality carrying pouch and a microfiber cleaning cloth. For $19.99/29.99, the Orion and the Hydra are a bargain, and we highly recommend both. You can order either directly from the manufacturer via the official NoScope website.

With a solid build quality, the lack of magnification and positive results, the NoScope Hydra and Orion prove that you can get excellent protective eye-wear at an affordable price. Gunnar Optiks have serious competition.

Old-school gamer with a cheeky tongue that gets me in trouble. When I'm not playing games, I'm writing about them, preferably in the vicinity of a fridge! Oh, and if you're a Justin Bieber fan, I'm afraid we can't be friends!
Previous Bloodborne’s online co-op features revealed
Next EVGA pulls out the big guns – The GTX 980 Classified and GTX 980 Hydro Copper