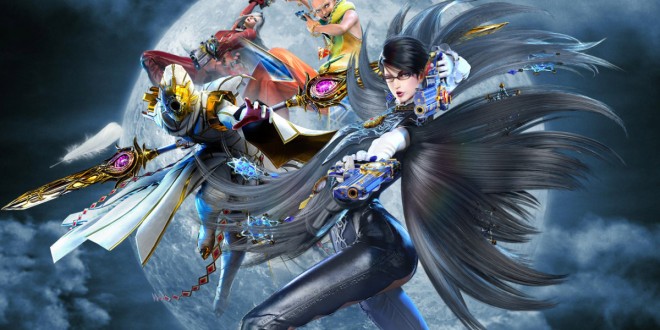 Bayonetta 2, the hack and slash title from Platinum Games received a perfect 10 out of 10 score in an Edge Magazine review according to Nintendo news. The Wii U exclusive title has already been released in Japan on September 20, and is set to launch on October 24 in North America and Europe. The guys from Edge took the game for a full circle spin and shared some impressive feedback on how it plays and feels, after spending some good old Wii U quality time with it. Bayonetta 2 is a follow up to the first part of the series, and will build on the story of its predecessor. As it had big shoes to fill, it certainly didn’t disappoint. Players will control the notorious Bayonetta in her fights against angelic and demonic enemies by using various melee attack combinations and gunfire. The game will give players the chance to carry a huge arsenal of weapons including signature guns, a bow, swords and many other projectile weapons. It will be an absolute thrill to play. Take a look at some of the thoughts, courtesy of Edge Magazine:

As you can see, Bayonetta 2 has truly got it and appeals to all types of players. A game with such promise is hard to find, even in today’s market, and as stunning as it looks in this new trailer makes me wanna cross the street, storm through the multimedia store and buy a Wii U console just to play Bayonetta 2. Edge had a few more things to say about the game: “You never tire of it, but how could you? This is a game that begins with Santa riding a car along the side of a building, continues with you summoning a demon to headbutt a meteor, and ends with the most joyously cathartic climax of any game since, well, Bayonetta. When the pace does dip, there is more than enough charm, wit, and heart to take its place. It is a masterclass in combat design, in video game variety, in the balance between accessibility and depth. Sure, it’s a sequel, but it’s a sequel to what has stood, for almost five years, as the best game of its type ever made. Until now, that is. SEGA’s loss is Nintendo’s gain: Bayonetta, twirling away from a gigantic demon’s maw and smacking the highest choir of angels on the nose, has just given Wii U its first true classic.”  Check out the brand new Bayonetta 2 trailer:

I'm Razvan, a sports and first-person shooter enthusiast. I've always loved writing, even more so when it involves games. When I'm not playing on my PS3 or writing, I like to run exhausting cardio workouts, play soccer, watch a good movie, or read a good book.
Previous iPhone 6 vs Galaxy Note 3
Next Halo 2: Anniversary’s content ties into Halo 5: Guardians