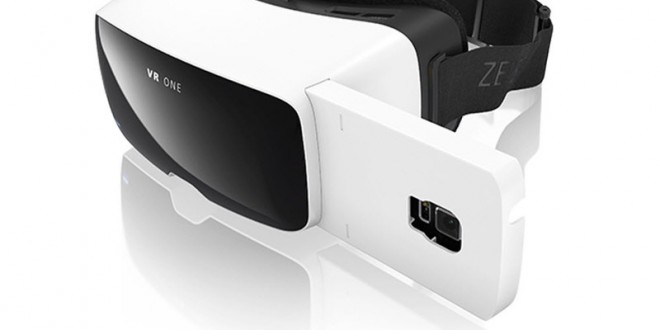 Carl Zeiss VR One headset up for pre-order

Carl Zeiss has unveiled its competitor to the Samsung Gear VR in the form of the VR One headset. Carl Zeiss has decided that it would make a virtual reality device that will function in a similar way to the Gear VR, but allow for a much wider target audience. The VR One headset from Carl Zeiss looks and works similarly to the Gear VR, based on the Google Cardboard design. What’s neat about Carl Zeiss’ VR One is that it allows you to pair it with more than one smartphone, unlike the Gear VR which can only be used with the Galaxy Note 4 phablet.

The VR One from Carl Zeiss not only brings a more versatile touch to the virtual reality headset business, but comes in as the cheapest Google Cardboard-like device you can come across at the moment. The VR One will set you back only $99 and you will be able to pair with Android and iOS devices, with screens ranging from 4.7 inches to 5.2 inches in diameter. Carl Zeiss has already put the VR One up for pre-order so you can get it at the optics manufacturer’s website.

Carl Zeiss said that it would sell the VR One with specific trays for different types of smartphones, each different tray you get besides the one included setting you back $10. The first trays that will be available via Carl Zeiss are made for the Samsung Galaxy S5 and the iPhone 6, but additional trays for different devices will be made available soon. The VR One is built on an open-source platform with apps that allow you to view 3D movies, galleries, Street View and augmented reality. Carl Zeiss will be putting out an SDK to developers so that they can make more apps for the VR One. The first units are expected to start shipping by the holidays.

The device from Carl Zeiss looks pretty high quality and the fact that it will be able to pair with several smartphones, as well as support both iOS and Android devices – and is dirt cheap, in my opinion, will surely make the headset immensely popular. While there are limited amounts of the Carl Zeiss VR One headsets available at the moment, the company plans a wider release for later this year or early in 2015. I’m thinking of buying the Carl Zeiss VR One next year, as I will wait for some user reviews and product demos to appear so that I can decide whether the VR headset is worth it or not. Will you be getting one or do you think VR headsets are overrated?

My life-long dream has been to test out every gadget on the market! Considering the fact that I've rapidly destroyed almost every gadget I've had so far, I'm not inclined to owning something, so my ideal outcome would be to have a different gadget each month. I'm really into smartphones, wearables and tablets and I love Playstation and Xbox, I'm sure I'll beat you at your own game (after a month of training... or two)
Previous Driveclub server issues still not mended after 1.03 update
Next Galaxy Note 4 update improves battery life