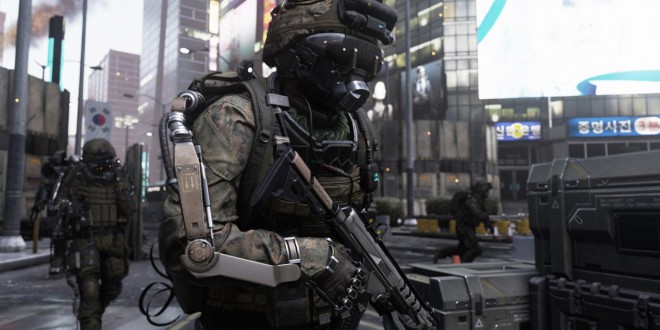 Sledgehammer co-founder has a lot to share on Call of Duty: Advanced Warfare

In an interview with 3news, Sledgehammer co-founder Michael Condrey offered some insightful details on their upcoming Call of Duty sequel, Advanced Warfare. As we are quite familiar by now with many of the features to be included in Advanced Warfare, Condrey chose to focus on the new multiplayer features, Kevin Spacey, and whether the unfair practice of quick-scoping returns to the Call of Duty franchise. Both Activision and developer Sledgehammer will be embarking on a mission to set new records and standards in this vast industry, taking three years instead of the usual two for developing Advanced Warfare. Shooter enthusiasts will be feeding off the highly plausible futuristic World War scenario portrayed in Call of Duty: Advanced Warfare as members of the Atlas Corporation fighting to restore global stability and democracy. At the helm of this private military corporation will stand Jonathan Irons (Kevin Spacey), the leading iron hand of a new world order.

Condrey’s thoughts vis-a-vis the Hollywood celebrity are nothing short of flattering, as he feels that Spacey brought a game changing set of skills along, raising the standard of talent for all the people involved in the creation of Call of Duty: Advanced Warfare, from the writing staff to the team of directors. “I had the pleasure of meeting him and working with him a few times. I can tell you he is smart, funny, charming, charismatic and all of those things. It’s amazing to get an actor of that caliber interested in the game and then watch him bring performances to life. When he gets on stage and he turns into Jonathan Irons, he brings that 20 years of acting like what you remember from the ’90s, and it’s super impressive. I think it’s going to shine in the campaign.” Sledgehammer co-founder also explained that this Call of Duty game will be focusing a great deal on the narrative aspect which is expected to stand out, as the fans will always appreciate a great storyline on top of the fancy features and graphics.

Multiplayer wise, the original Call of Duty tradition has been preserved, but with some important additions such as the loot system and the virtual lobby. “The loot system is a huge, new system for Call of Duty. The virtual lobby is also new. For the first time ever you also have the chance to really, truly represent your character in-match and in the lobby. We have the virtual firing range, customized score-streaks – we threw a lot at this one, there really is a lot in there. It’s been a challenge because we want to innovate in a massive way and thrill fans, but not alienate them by breaking what makes Call of Duty great.” The Advanced Warfare multiplayer mode will also include a new weapons class called Directed Energy, the XMG massive firepower and the Lockdown mode in which you’ll be able use XMG and exo-machine guns to blast anything that moves. Lastly, the quick-scoping feature will be more limited than in previous titles, leveling the playing field.

I'm Razvan, a sports and first-person shooter enthusiast. I've always loved writing, even more so when it involves games. When I'm not playing on my PS3 or writing, I like to run exhausting cardio workouts, play soccer, watch a good movie, or read a good book.
Previous Wildstar will switch to Megaservers later this week
Next Deathtrap’s Early Access starts this October, first screens out