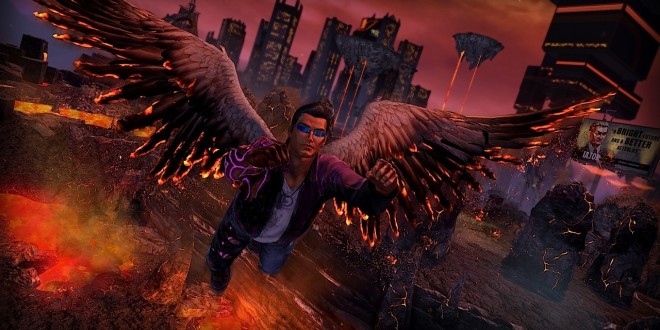 Volition and Deep Silver teamed up for a new Saints Row IV standalone expansion, Gat out of Hell – an open world action-adventure title which promises to unleash hellish amounts of fun on PC and console platforms. Saints Row: Gat out of Hell has a unique weapons arsenal, featuring nine new firepower devils snatched from Satan’s arsenal, and four brought back from Saints Row IV; players will now be able to pick out a flamboyant set of Seven Deadly Weapons – each weapon symbolizing one of the Seven Deadly Sins: Envy, Pride, Greed, Lust, Sloth, Wrath, and Gluttony. The new trailer will give you the chance to see them work overtime in a busy day at the office.

The news to get more excited about is that you will be able to stash them in your weapons inventory all together, as Saints Row has luckily got 7 weapon slots, so each sin will have its own slot: Melee, Pistol, SMG, Shotgun, Rifle, Explosive, and Special. Collecting all these weapons will prove quite challenging; each one of them will have a unique and fun way of being taken into custody. Get acquainted with every single one, and take your pick. Meet the melee slot weapon, Uriels Edge, or should I say Envy of Hell? This giant flaming sword will carve the enemies around you in no time, or if you prefer, it will launch mighty fireballs to turn them into flying barbecues at a snap of your fingers. Gleaming in Pride, the Gallows Dodger pistol is constantly boasting with the number of corpses it left behind and will continue to feed off the ones asking for a taste of its slugs. Diamond Sting will land in the SMG slot with an insatiable Greed to drop targets by “caressing” them with diamonds and forcing them to drop additional Wages of Sin. Yes please, I want to max out my upgrades faster. Boom Chicka is the shotgun baby that eagerly awaits a Lust driven enemy willing to be laid down by some intoxicating scents. After receiving a dose of its perfume, enemies will joyfully approach for an easy blast.

The portray of Sloth, Armchair-A-Geddon sits in the rifle slot and will allow you to blast creatures from the comfort of a movable armchair. Fitted with dual mini-guns on its arm rests and being capable of launching anti-aircraft missiles, this weapon will come in handy if you’re too lazy to move your behind to make a kill. The Wrath shown by the explosive Ark of the Covenant will literally suck nearby targets’ souls and spit them out at range. The wrathful soul will split into multiple directions to attack additional nearby targets. You’ll have to steal this weapon from under the nose of Satan’s top lieutenant of Hell – a familiar face for the fans of the series. Last Supper will occupy the special weapon slot and serves best for seasoning your targets with some delicious demonic frosting and Gluttonously ravage the target to death. Your enemies will surely enjoy this tasty last supper. Saints Row: Gat out of Hell is scheduled to launch on January 27, 2015 on PC, PS4, PS3, Xbox One, Xbox 360, but recent news reveal a new release date for PS3 and PS4 versions, which will land on January 23rd. Check out the 7 Deadly Weapons trailer below.

I'm Razvan, a sports and first-person shooter enthusiast. I've always loved writing, even more so when it involves games. When I'm not playing on my PS3 or writing, I like to run exhausting cardio workouts, play soccer, watch a good movie, or read a good book.
Previous Nexus 6 officially announced and detailed, runs on Android Lollipop
Next Nexus 9 is official, sports an Nvidia Tegra K1 chip and runs on Android Lollipop

Developer Fatshark and publisher Deep Silver have released a few new screenshots and a launch ...