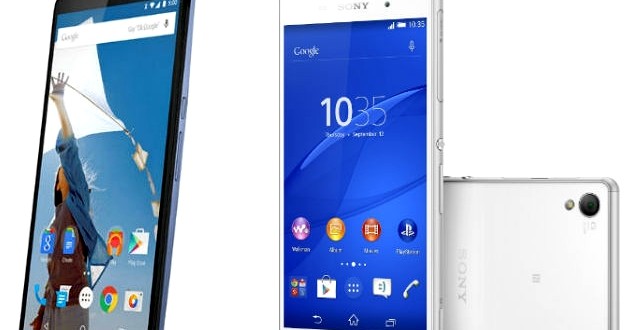 While the Sony Xperia Z3 has just hit the U.S. market, the Nexus 6 has just been launched by Google and Motorola as the newest addition to Google’s Nexus line of devices. The Nexus 6 came with the added benefit of Android 5.0 Lollipop, which should come as one of the best mobile operating systems on the market. The Sony Xperia Z3 will also be getting the Android 5.0 Lollipop update in a matter of weeks, and we’re curious to see how it will look on the Xperia Z3. We can say that both these flagships are outstanding smartphones and will surely be hits on the U.S. market, but we would still like to compare them to see how they size up to each other.

The Sony Xperia Z3, as well as the Galaxy Note 4, are top of the list for battery life and endurance, with a 2 day battery life for the Xperia Z3 with mixed use. That is no small feat since smartphone batteries have not yet reached the point when customers can say that they are truly content with what they’re getting out of their phones, but the Xperia Z3 as well as the Galaxy Note 4 are getting closer to the goal of a week-long battery life. We should see bigger and better batteries with better endurance and optimization in the following two to three years, and breakthroughs in battery tech should ultimately reach the point when they can be used and optimized for extended battery life. The Nexus 6 battery is as big as the one in the Galaxy Note, with a 3220 mAH count.

The Galaxy Note 4 has a smaller, but more saturated screen to power, though, so we can safely say that we expect to see at least a day and a half of battery life with mixed use on the Nexus 6 from Motorola. That still doesn’t beat the great battery on the Xperia Z3 and Xperia Z3 Compact, but just as the Galaxy Note 4 received an update that improved the initial great battery life even more, Google and Motorola might do the same for the Nexus 6. Both the Nexus 6 and Sony Xperia Z3 are now available for pre-order as well as purchase, so if you are set on getting the device with the best battery life out there, my bet would be on the Xperia Z3. If you’re skeptical and really like the new Nexus 6, you might want to wait just a few more days or a week or so, to see some extensive reviews of the phablet, so that you can hear other peoples’ opinions about the Nexus 6 battery life.

The Nexus 6 price is on the hefty side, which is kind of odd, seeing as the Google Nexus line usually aims to offer high quality handsets for lower prices. Sundar Pichai had said at the launch event on October 15 that the Nexus 6 should be a model device for Android 5.0 Lollipop and aims to show manufacturers and OEMs how Android 5.0 Lollipop and a high quality handset coupled together should look like. The Nexus 6 might be seen as a guideline for future Android device makers and the phablet doesn’t disappoint, to be honest. You will be able to get your hands on the Nexus 6 starting October 29 and the device will set you back $650 off-contract for the 32 GB variant. The Sony Xperia Z3 price is about the same for the unlocked version, around $600, so if you have a set budget when trying to decide between the Xperia Z3 and Nexus 6, price shouldn’t be a deal-breaker, because the two handsets are just as expensive.

The Sony Xperia line is famous for being water- and dustproof, and the Xperia Z3 is no exception, with an IP68 certification. That means that you can even use the Xperia Z3 to take short videos under water and won’t have to worry about ruining your new device. The Nexus 6, on the other hand, doesn’t have an IP certification, but that doesn’t mean you’re going to end up with a ruined phone if you splash some water on it by accident. According to Motorola, the Nexus 6 is water resistant to some extent, but you still shouldn’t take it swimming. That being said, the Xperia Z3 would be more suitable for those of you who have more active lifestyles that involve a lot of water-mingling or off-road running and activities of the sort. The Nexus 6 and its moderate water resistance are not something to be overlooked, though, and it’s a nice feature to see on a Nexus device.

The Nexus 6 is actually a phablet, with a 5.96 inch AMOLED screen with a 1440*2560 resolution, the screen featuring Corning Gorilla Glass 3 protection. That makes for a pretty big device, measuring 159.3 mm in height, 83 mm in width and 10.1 mm in thickness. The Sony Xperia Z3 has a substantially smaller 5.2 inch IPS LCD screen with a lower, 1080*1920 resolution, made out of a shatter-proof glass and featuring a Triluminous display. The measurements on the Xperia Z3 are as follows: 147 mm in height, 72 mm in width and 7.3 mm in thickness. That being said, it is clear that while the Xperia Z3 seemed a bit bulky and a large so far, it is in fact much thinner and more maneuverable than the Nexus 6. That doesn’t mean that the Nexus 6 has a bad design, it just means that those who would rather use their devices with one hand, would be more comfortable with the Xperia Z3. Nonetheless, if you’re a fan of great, bright, crisp screens, the Nexus 6 packs more pizels, even if it’s larger. The Nexus 6 pixel density is 493 ppi, while the Xperia Z3 one is 424 ppi. You probably won’t see the difference unless you put the two handsets side by side, because the human eye won’t sense differences above 350 ppi, but you will be able to see more vivid colors and brightness on the Nexus 6.

You will find an NFC port on both handsets, as well as Wi-Fi 802.11 a/b/g/n/a/c, Bluetooth 4.0, stereo speakers and a 9 axis sensor. Neither phones have IR blasters, though, so you won’t be able to use your device as a remote control in your house, unless you use dedicated apps for your home automation devices. As stated before, both the Xperia Z3 and Nexus 6 will end up with the latest Android operating system, Android 5.0 Lollipop. The Nexus 6 has been endowed with a 13 MP sensor on the rear and a 2 MP sensor on the front, while the Xperia Z3 has a 20.1 MP shooter on the rear and a 2.2 MP one on the front. The Nexus 6 camera does have optical image stabilization and a dual LED ring flash, while the Xperia Z3 lacks the OIS, but does have an LED flash on the rear. Camera-wise, we’ve been disappointed by the previous edition LG Nexus 5, but we still can’t say much about the improved sensor on the Nexus 6 until we manage to take some sample shots. It seems to be a powerful camera, but the Xperia Z3 Exmor sensor has impressed us quite a few times in the past few weeks, so we’ll have to wait and see if the Nexus 6 can live up to that performance.

As you have probably figured out by now, the Xperia Z3 and Nexus 6 aren’t too different, but the differences that we find are in key areas like the camera, the size, the display and the battery. Since the Nexus 6 hasn’t been thoroughly tested yet, we can’t say for sure that it’s better or worse than the Xperia Z3. The Xperia Z3 is an impressive device, which is just a bit behind the Nexus 6 processing power, but until we see a real-life evaluation of the Nexus 6 performance, we can’t say it’s superior yet, although it is promising. This is a difficult conclusion to arrive to, and ultimately, it will depend on the user. The Nexus 6 is a powerhouse phablet which will surely impress with its screen, as well as stock Android 5.0 Lollipop, while the Xperia Z3 is endowed with a wonderful camera, chassis and great battery life. Which would you choose, if both of them were offered up to you for free? I would go for the Nexus 6, because I like the design more and prefer the newer CPU, fast charging capabilities it has ported from the Motorola Moto X, as well as the bright screen. How about you?

My life-long dream has been to test out every gadget on the market! Considering the fact that I've rapidly destroyed almost every gadget I've had so far, I'm not inclined to owning something, so my ideal outcome would be to have a different gadget each month. I'm really into smartphones, wearables and tablets and I love Playstation and Xbox, I'm sure I'll beat you at your own game (after a month of training... or two)
Previous iPad Air 2 vs Nexus 9 – newcomers battle
Next Upcoming PS4 2.0 update has a lot in store