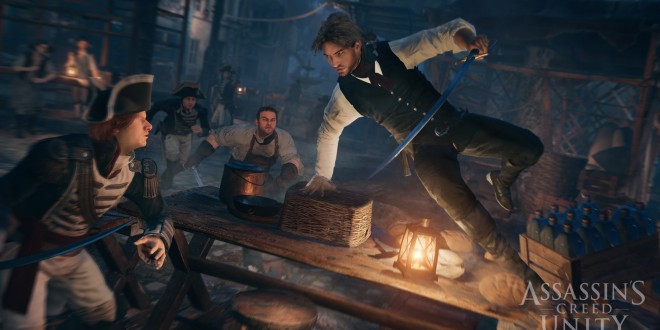 Assassin’s Creed Unity gets a 101 trailer

Publisher Ubisoft has released yet another promotional trailer for its upcoming third-person, stealth-focused open-world title, Assassin’s Creed Unity. If you had somehow managed to miss all the other videos, stay calm knowing the ‘101 Trailer’ covers pretty-much everything – from the Parisian crowds to the improved, more “nuanced” combat, appearances by famous historical characters like Napoleon and the Marquis de Sade, and – of course – the new co-op multiplayer mode. Oh, and it also include that strange sequence in which Arno gets transported in Paris during the Second World War. Yeah, that one.

The main character of the game is Arno Dorian (Dan Jeannotte), a native Frenchman who was born in Versailles to an Assassin father. After his father is killed, Arno is adopted, unaware that his new family holds a senior position within the Templar Order, with his new father-figure the Templar Grandmaster. Arno blames himself when his adoptive father is murdered, and so sets out on a quest of redemption that brings him into the Brotherhood of Assassins, where he slowly rises through the ranks, much like Altaïr Ibn-La’Ahad and Ezio Auditore as seen in previous games. Arno’s love interest is a Templar named Elise De LaSerre (Catherine Bérubé), the daughter of the Templar Grandmaster who adopted Arno, who also sets out to investigate more about her father’s death and its role in a growing ideological change within the Templar Order that threatens its core values.

I’m Load The Game’s co-founder and community manager, and whenever I’m not answering questions on social media platforms, I spend my time digging up the latest news and rumors and writing them up. That’s not to say I’m all work and no fun, not at all. If my spare time allows it, I like to engage in some good old fashioned online carnage. If it’s an MMO with swords and lots of PvP, I’m most likely in it. Oh, and if you’re looking to pick a fight in Tekken or Mortal Kombat, I’ll be more than happy to assist! Connect with me by email markjudge (@) loadthegame.com only
@@MarkJudgeLTG
Previous No downgrading The Division on PC, Ubisoft will “cram it up”
Next Counter-Strike: Global Offensive is getting an ESL league system with $50,000 prize pool