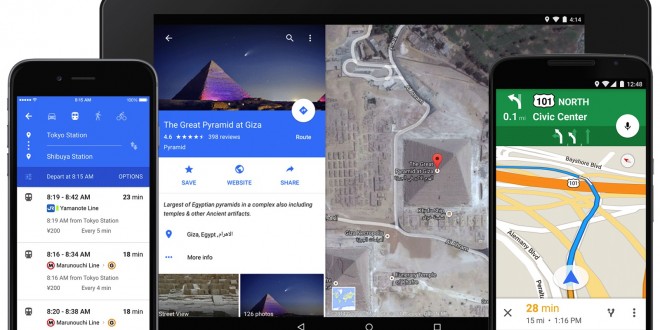 Ever since Google released the very first developer previews of Android 5.0 Lollipop a few months ago, many have been impressed by the Material Design of the new user interface. Even before Android 5.0 Lollipop was launched, Google was already redesigning and rolling out updated versions of its apps, including Gmail, Calendar and Google+. Google Maps has also received some minor tweaks, but in the latest Google Maps update, Material Design goes full-blown. Google Maps 9.0.0 is compatible with Android 4.3 and above running smartphones and you can already get the APK in case the update hasn’t rolled out to your device yet.

The new Google Maps update looks just as good as we expected it to and the APK is already available in case you haven’t received the OTA yet. The update doesn’t just re-vamp the Google Maps appearance, but it adds a few new features, too. After you install the new Google Maps update, you will notice more comprehensive Uber integration. That means that whilst checking directions, you will get an estimated pickup time as well as an estimated fare based on the location you are trying to get to. Besides the improved Uber integration, the Google Maps update also brings OpenTable integration, which will come in handy for those who are used to eating out. With OpenTable, you can make reservations directly on a certain restaurant’s Google Maps card.

While the few new features introduced by the Google Maps update are handy ones, the biggest highlight of the APK is the design overhaul. When you tap on an info sheet of a place usually at the bottom of the screen, you will be greeted with an info layer that shows reviews, photos and directions to the place. You should have Uber installed if you want to get the integrated estimates for pickup time and fare price within Google Maps. While Android 5.0 Lollipop is still underway and many of you are impatient, the Google Maps update provides a great preview of how the new mobile OS will look like on your phone. You should expect the Android 5.0 Lollipop rollout to begin on November 12 and it should hit the Nexus 4, Nexus 5, Nexus 7 and Nexus 10 first, after which we should see it on Google Play Edition devices, Nvidia Shield Tablet, Samsung Galaxy S5, Galaxy Note 4 and the HTC One M7 and One M8.

My life-long dream has been to test out every gadget on the market! Considering the fact that I've rapidly destroyed almost every gadget I've had so far, I'm not inclined to owning something, so my ideal outcome would be to have a different gadget each month. I'm really into smartphones, wearables and tablets and I love Playstation and Xbox, I'm sure I'll beat you at your own game (after a month of training... or two)
Previous The Witcher 3 Wild Hunt will feature 16 DLC pieces… all free
Next Ubisoft details The Crew’s season pass