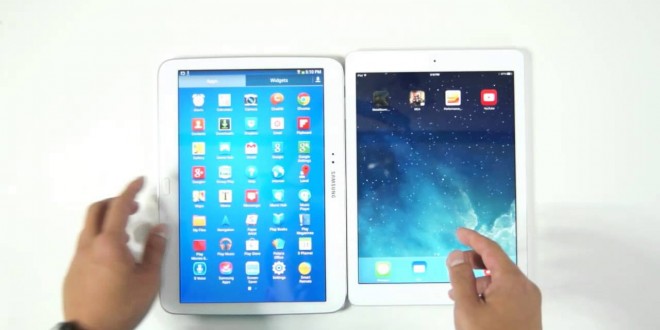 The Samsung Galaxy Tab 4 10.1 and iPad Air have been two staple devices of the year for both Samsung and Apple. Even though newer tablets have come out since these slates appeared, they still are among the best tablets you can get for your money. While neither the Galaxy Tab 4 or iPad Air is a cheap gadget to begin with, they both offer great features and performance. If you’re not one of those people who want to buy something as soon as it appears on the market, even if they don’t feel a practical need for it, then you might want to consider the aforementioned tablets as viable options if you’re hunting for a good portable device.

The Galaxy Tab 4 10.1 was released on April 1st, 2014 and came as a pretty popular, yet expensive Android slate. The iPad Air came as one of the thinnest 10 inch tablets you could find on the market at the time of its release in October 2013. While both tablets have successors now, they still remain in the top ten list of most tech enthusiasts. While the iPad Air is a bit older than the Galaxy Tab 4 10.1, it is still considered just as powerful as more recent tablet releases from Samsung, Nexus, Lenovo and Asus. While I don’t agree with that, I have to say that the iPad Air is indeed a good example of durable and powerful hardware in an attractive body. This comparison will give you a detailed image of each device’s specs and features and will attempt to determine which of them offers greater bang for buck. Remember that in the end, you have to choose based on your own needs and preferences, not because a review said so. At the same time, you should make an educated choice when it comes to gadgets like tablets, because the aim is to keep them functional for as long as you can.

The iPad Air has a pretty good reputation when it comes to durability, even though it’s a pretty thin device that seems fragile. The aluminium chassis of the slate makes it cold in the hand and pretty pleasant to handle. Since it’s really thin and light, the tablet is easy to carry around and does offer a pretty pleasant user experience compared to heavier Android or Windows tablets. The iPad Air measures 240 x 169.5 x 7.5 mm and weighs 409 grams, which makes it one of the lightest and thinnest you can get your hands on. Its successor, the iPad Air 2 has surpassed it in terms of design, though. While I’ve said that it’s a 10 inch tablet, it only has a 9.7 inch IPS LCD display, but that’s not that big of a deal. The resolution on the display is 2048*1536 with a 264 ppi pixel density, which looks great both outdoors and indoors. The slate also has pretty slim bezels and an overall pleasant, slim and sleek design to it.

The Galaxy Tab 4 10.1 is a slightly larger and heavier tablet, but it makes up for that with bigger screen real estate. Its measurements are 243.4 mm in height, 176.4 in width and 7.95 in thickness, weighing 487 grams. The difference in footprint between the Galaxy Tab 4 and iPad Air isn’t that big, but you will notice it if you hold them side by side. Samsung’s tablet has a slightly larger, 10.1 inch TFT display with a considerably lower 1280*800 resolution and 149 ppi pixel density. The Galaxy Tab 4 also has bezels just a bit thicker than the iPad Air, but not so much as to make its appearance repulsive or anything. While the iPad Air is most used in portrait mode, the Galaxy Tab 4 looks better in landscape mode. Just my two cents. As for display and resolution, the iPad Air is superior to the Galaxy Tab 4 because it has a better resolution, better screen quality and higher pixel density, which makes for brighter colors and sharper display.

When it comes to the camera setup, the Galaxy Tab 4 has a 3 MP rear shooter and a 1.3 MP front camera. The iPad Air once again beats Samsung’s tablet with a 5 MP rear camera and a slightly smaller 1.2 MP front camera. Most users and tech enthusiasts say that the iPad has a better camera and takes better shots, which applies in this case, too. Since the main function of 10 inch tablets isn’t photography, the camera setup shouldn’t be a determining factor in this comparison. Nonetheless, we do have to credit the iPad Air with a win in this case, since the Galaxy Tab 4 camera is pretty weak compared to the Apple slate’s camera. It can also shoot 1080p video @30fps, while the Galaxy Tab 4 is only capable of 720p video @30fps. 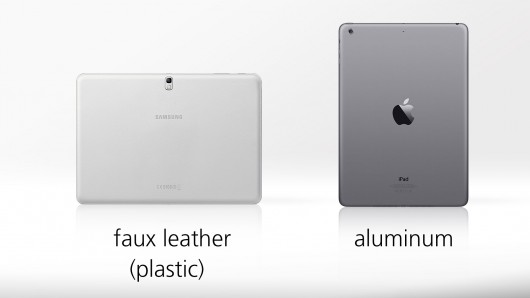 As for performance, both slates are reportedly pretty good in their niche, which means that you won’t be experiencing much lagginess or skipped frames whilst using graphics intensive apps or games. In consequence, we should mention that the Galaxy Tab 4 specs include a quad core Snapdragon 400 CPU clocked at 1.2 GHz, backed by an Adreno 305 GPU, 1,5 GB RAM and 16 GB internal storage. iPad Air specs include Apple’s 64 bit dual core A7 CPU clocked at 1.4 GHz with a PowerVR G6430 GPU, 1 GB RAM and 128 GB internal storage. Apple’s slate doesn’t have a microSD card slot, but it doesn’t really need it. The Galaxy Tab 4 allows microSD storage expansion up to 64 GB, as usual with Samsung. As you can see, the Galaxy Tab 4 and iPad Air specs size up pretty nicely next to each other and you will get great performance out of both of them. As we’ve mentioned before, the Tab 4 runs on Android 4.4.2 with TouchWiz on top, while Apple’s tablet runs on iOS 7 out of the box, upgradable to the brand new iOS 8 operating system. iOS 8 has made considerable improvements compared to iOS 7, so you should definitely upgrade your iPad if you want to fully take advantage of it. iOS 8 brings many features Android users have enjoyed for quite a while now, like widget integration, third party keyboards and more customizability.

One of the most important aspects to keep in mind when it comes to tablets is the battery life. Since you mainly use tablets for media consumption, especially when we’re talking about Android and iOS tablets, you need good battery life so that you won’t have to constantly charge and carry cables around with you. The Galaxy Tab 4 battery is a 6800 mAH juicer which reportedly lasts for about 10 hours with mixed use. That’s a pretty nice performance for such a big tablet, but if you want ultimate battery life, you should opt for the Lenovo Yoga Tablet, because it can actually last more than 24 hours with mixed use. Yes, I am biased here, but I gamed and browsed and videod and social mediad on the Yoga Tablet for a day and a half and still had some battery left to work with. In the case of the iPad Air, it sports a bigger 8820 juicer, but it does have more pixels to power which means a bigger drain on the battery. Reports on the slate’s battery life have been mixed, but usually users say that the iPad can go about 7 hours with mixed use. That’s a bit of a downer, but considering the higher resolution of the display, it can still be considered acceptable. Nonetheless, if you want to carelessly use your tablet when away from a power source, the Galaxy Tab 4 10.1 would be a better choice. 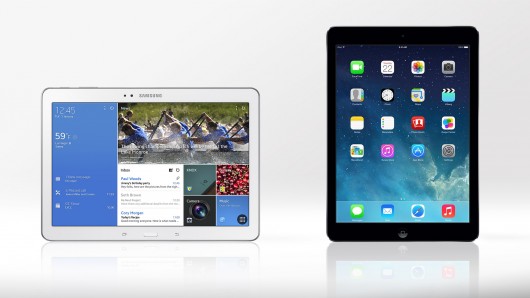 In other areas such as connectivity and features, the Galaxy Tab 4 and iPad Air are pretty much the same, sporting LTE connectivity, Wi-Fi, Bluetooth, 9 axis sensors, voice commands, haptic feedback, A-GPS and such. The iPad Air does have better stereo speakers than the Galaxy Tab 4. Now let’s talk cash. The Galaxy Tab 4 10.1 price is currently set at around $320 on Amazon and other e-commerce sites, which is a pretty average price for a 10 inch tablet with this kind of resolution. The iPad Air price varies from $450 to $650 depending on how large a storage capacity you want, since it is available in 16, 32, 64 and 128 GB versions. Now for the conclusion. Even though the iPad Air is considerably more expensive than the Galaxy Tab 4 10.1 it does offer a good bang for buck, since it has a better display. It does lack in terms of battery life, though, so our opinion is a little split on this one. In the case of the Galaxy Tab 4 10.1, on the other hand, we can safely say that we can forgive the inferior camera and resolution for the lower price point and better battery life. What do you think? Which offers the better bang for buck in your opinion? Sound off in the comments.

My life-long dream has been to test out every gadget on the market! Considering the fact that I've rapidly destroyed almost every gadget I've had so far, I'm not inclined to owning something, so my ideal outcome would be to have a different gadget each month. I'm really into smartphones, wearables and tablets and I love Playstation and Xbox, I'm sure I'll beat you at your own game (after a month of training... or two)
Previous Moto Maxx is the international version of the Droid Turbo
Next Call of Duty: Advanced Warfare – PS4 vs Xbox One Multiplayer graphics analysis