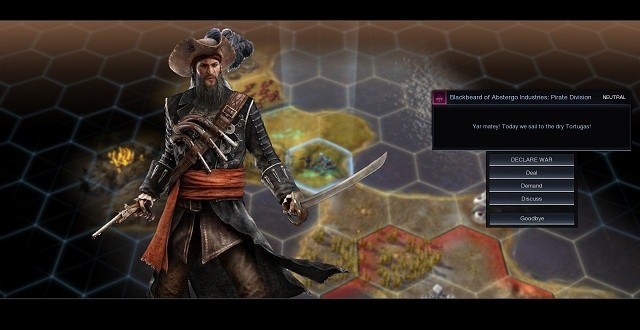 The Civilization series has always done a great job at supporting mods created by its player community. The recently released Civilization Beyond Earth is no exception and you can already find a plethora of mods for the game in the Steam Workshop. While some of them come with small changes aimed at making the complex tech web easier to understand, other are more ambitious and add new units or even civilizations to the game. Then, there’s the Abstergo Industries: Pirate Division mod which gives you a few additional starting options to work with when you begin your Civilization Beyond Earth adventure. If the name of the mod sounds familiar, it’s because you might have heard it in a little game called Assassin’s Creed.

First off, the mod introduces a new sponsor to the game, the titular Abstergo Industries: Pirate Division. This sponsor provides you with triple energy when plundering trade routes and also makes it so that your Covert Operations cause 25% more intrigue. If you wish to choose this sponsor for your Civilization Beyond Earth game you might also want to pair it up with the new ‘Swashbucklers’ colonists, which give you +3 energy and +1 production in every city. Not sure how this fits in with the pirate theme, but it’s definitely a nice bonus to start with. Next off, you can also choose the new Crow’s Next Spacecraft and Blackbeard’s Treasure cargo module. By doing so, you’ can start off a new Civilization Beyond Earth game with +1 sight range for all units and +1 energy from all Water Tiles in your first city.

Last but not least, the Abstergo Industries: Pirate Division mod also adds a new leader for your civilization and it’s none other than the famous Blackbeard. Now, Civilization Beyond Earth is a game set in space, so the whole pirate-theme doesn’t really make a whole lot of sense if you ask me. However, if you’re a fan of the Assassin’s Creed series you might wanna give it a try because it provides your starting civilization with some pretty nice bonuses after all. You can check out this mod, as well as a bunch of other ones created by the community in the Steam Workshop.

I’m Load The Game’s co-founder and community manager, and whenever I’m not answering questions on social media platforms, I spend my time digging up the latest news and rumors and writing them up. That’s not to say I’m all work and no fun, not at all. If my spare time allows it, I like to engage in some good old fashioned online carnage. If it’s an MMO with swords and lots of PvP, I’m most likely in it. Oh, and if you’re looking to pick a fight in Tekken or Mortal Kombat, I’ll be more than happy to assist! Connect with me by email markjudge (@) loadthegame.com only
@@MarkJudgeLTG
Previous Assassin’s Creed Rogue review | he makes his own luck
Next Assassin’s Creed Unity Patch 3 in the works, here’s the preview