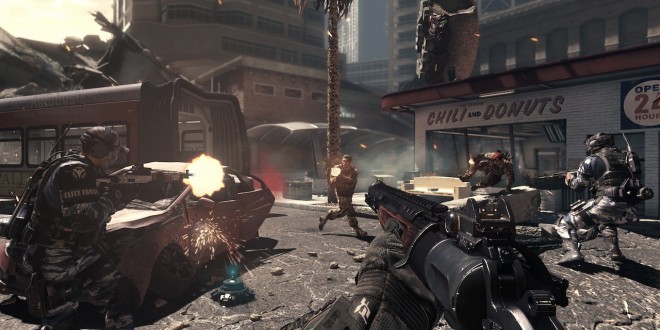 With the new era of next generation consoles getting into the swing of things there seems to be a trend appearing with first person shooters. Titanfall kicked things off with the next-level maneuverability showing off double jump and free running and even the dash that the titans utilize. Well received by the players, this opened up new gameplay, more diverse levels and fast flowing gameplay. With Call of Duty Advanced Warfare adding in similar mechanics and Halo 5 looking like it’s following suit could this be something that becomes a core mechanic of most First Person Shooters?

This is not to say one is copying another or they’re stealing ideas. In fact I think everyone could do to ease up on accusing games of copying one another in terms of simple mechanics and enjoy the companies learning from each other’s successes. Besides, Halo and COD Advanced Warfare started production around the same time. Needless to say, the mechanic seems popular and that it may well be becoming a constant mechanic. Just as the sprint mechanic became an almost universal feature of FPSs.

Contextually speaking, it seems to need the futuristic setting. With the exo-suit in COD, thruster pack in Titanfall and retro rockets in Halo 5, it seems to need to be some sort of technological aid that provides this extra maneuverability. So maybe not all games unless it is a magical aid for instance or the game itself is more comical, not needing the realistic explanation.

Now that we have experienced this diverse maneuverability, will we be able to lose it? I know after players became used to sprinting in games like COD and Battlefield played Halo Reach were highly unhappy that it was a specific armor ability, not just a core mechanic. So now that we’re getting used to this extra maneuverability will we be cheated when a game comes out without it? Especially the next COD or Halo. Can we go backwards on this one?

I’m Load The Game’s co-founder and community manager, and whenever I’m not answering questions on social media platforms, I spend my time digging up the latest news and rumors and writing them up. That’s not to say I’m all work and no fun, not at all. If my spare time allows it, I like to engage in some good old fashioned online carnage. If it’s an MMO with swords and lots of PvP, I’m most likely in it. Oh, and if you’re looking to pick a fight in Tekken or Mortal Kombat, I’ll be more than happy to assist! Connect with me by email markjudge (@) loadthegame.com only
@@MarkJudgeLTG
Previous Halo – The Master Chief Collection Matchmaking Fix Delayed
Next Far Cry 4 Players Experiencing Issues