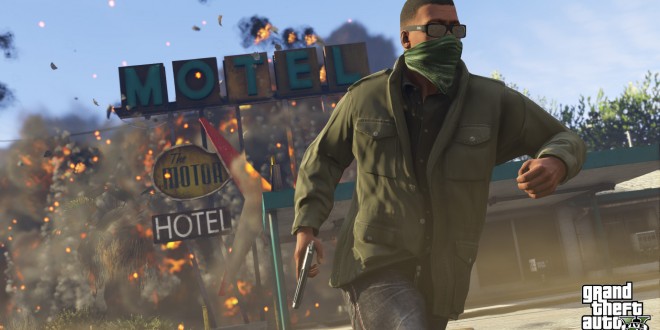 GTA V is back and it apparently has some easy exploits on the re-release, which dropped for Next-Gen consoles earlier this week. We already showed an exploit for easy money on GTA V’s singleplayer, but this is for GTA V’s online. It allows the player to make $500k in a matter of minutes, but it only works 4 times a day, still it’s rather easy. For the PS4 version, you will select the challenge LOL and on the Xbox One version you will select the challenge titled GLED.

In order to get $500k, you will need to bet $250k, but there are bets for players with less money than that. The challenge is a 5 lap criminal race, where you have to finish in under 3 and a half minutes. While the first lump sum you will earn is only $3k, the second winning screen will load up and give you the prize you have been waiting for. Apparently another requirement for it to work would be that you HAVE to be in a crew, it does not matter what crew you are on for GTA, but you will have to be in one.

Some players who were on GTA V’s original Online launch may remember that there were MANY ways to exploit and gain easy money. So, this may not be the only way, but as of now it’s the only GTA Online money exploit I know of and have tested out. While the names of the two challenges are different for both consoles, players should be able to earn the exact same amount of money on GTA Online.

This is another bug Rockstar will surely fix, but it will help you buy all of the fancy things you want your GTA Online character to have. While the exploit isn’t terribly bad, as it has a 4 times a day cap, it still may be seen as cheating, so be careful and remember, there are other ways of gaining money! The heists are surely to come here soon and after the patch for that drops, money issues will be a thing of the past for players!

Christopher is a Contributor at Load The Game and a Community Manager for Project Extract. If he isn't writing about games or playing games, then he's more than likely thinking about, you guessed it, games. Christopher prefers RPGs over all, but isn't opposed to jumping in to just about anything.
@Reaperchris13
Previous DriveClub Ignition expansion pack gets launch trailer
Next Super Smash Bros – Wii U Review