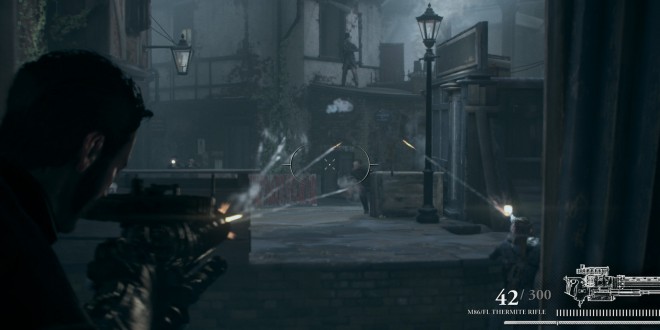 The Order 1886 demo will be available at the upcoming PlayStation Experience in Las Vegas, Nevada on December 6 and 7. The convention will be held at the Venetian hotel on the strip and will not only have unreleased games available to play but also features multiple panels by developers for attending fans. Unlike E3, this event is open to the public and created for them. The Order 1886, an upcoming game by Ready At Dawn, has been shown off frequently since its reveal in 2013 at E3. The game’s development was partly influenced by Uncharted 2: Among Thieves, and has been in development since 2010. Ready At Dawn’s previous games include: God of War: Chains of Olympus and Ghost of Sparta for the PSP and a port of Okami to the Wii. The Order 1886 will be their first HD game and their first original work ever, as they only ever dealt in licensed work. The game is a 3rd person action shooter set in an alternate reality where supernatural creatures are at war with humanity. The industrial revolution, aided by the mysterious black water, led to huge leaps in technology. At first glance it appears to be a version of steampunk history, but is instead more electrical and mix of middle age class warfare with horror film inspired half beasts roaming the city of London. The game will also be single-player only.

The PlayStation Experience is rapidly approaching and boasts a myriad of panels for fans to attend. Troy Baker and Ashley Johnson will be present for a voice acting panel, Telltale is having a panel titled, “Choice Matters,” and Shuhei Yoshida will be joining Adam Boyes and Scott Rohde for an AMA. Games that will be at the conference range from the highly anticipated Uncharted 4: A Thief’s End to indie titles such as The Witness. Additionally, Project Morpheus, Sony’s virtual reality headset, will be available to try out. Supergiant Games of Transistor and Bastion fame will also be attending, although there is no word on if they will be showing off previous games or announcing a new title. Tickets are on sale now and cost $90 for a two day pass and $50 for a one day pass.