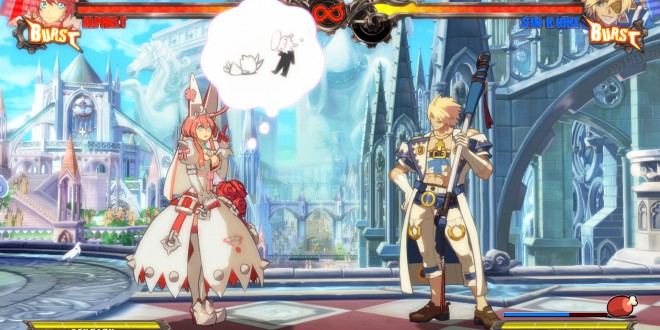 Guilty Gear Xrd Sign is the upcoming fighting title from Aksys Games. The first DLC fighter has been shown, and the character has been announced to be free for a limited time.

The first Guilty Gear Xrd Sign fighter will be the character Elphelt, according to Aksys Games. She will be free on the PSN in North America from December 16th to January 5th. After this, she will set players back $7.99.

A demo for Guilty Gear Xrd Sign was released today. The demo is only available to those with a PlayStation Plus account. The demo allows players to fight with main characters Sol Badguy or Ky Kiske. The game features the arcade mode for the two characters, allowing gamers to get a taste of both the story and the gameplay. The demo also includes the tutorial mode, helping new players learn the game’s mechanics, and giving Guilty Gear veterans a chance to polish up their skills.

The fifth entry in the Guilty Gear series, Guilty Gear Xrd Sign is a 2D fighting game utilizing the Unreal Engine 3. The game will feature 17 characters, including Elphelt. She will not be the only DLC character, as another will appear later. Guilty Gear Xrd Sign takes place in the year 2187, one year after the previous game, Guilty Gear 2: Overture. The game’s roster comprises mostly of previous fighters, though there are a few newcomers, such as Elphelt. Production of the game had begun in 2011, but it was not until 2012 that the game progressed into full scale production. The game first released in arcades in Japan in February, with this release being the game’s first appearance in America. The game has gone from hand-drawn 2D sprites to cel-shaded graphics, a first in the series.

I’m Load The Game’s co-founder and community manager, and whenever I’m not answering questions on social media platforms, I spend my time digging up the latest news and rumors and writing them up. That’s not to say I’m all work and no fun, not at all. If my spare time allows it, I like to engage in some good old fashioned online carnage. If it’s an MMO with swords and lots of PvP, I’m most likely in it. Oh, and if you’re looking to pick a fight in Tekken or Mortal Kombat, I’ll be more than happy to assist! Connect with me by email markjudge (@) loadthegame.com only
@@MarkJudgeLTG
Previous Mighty Gunvolt Receives DLC Trailer
Next YouTube Briefly Suspends Blizzard’s Channel