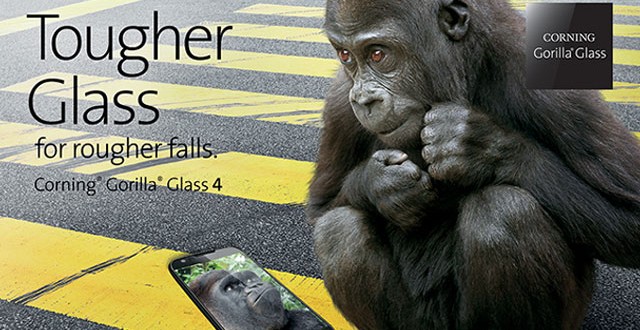 The Samsung Galaxy Alpha smartphone is the culmination of Samsung’s close collaboration with Corning according to a recent statement made by the latter. The infamous glass manufacturer announced that Samsung’s metallic smartphone will be the very first in the world to come equipped with their latest Gorilla Glass 4 screen protection. Corning says that its fourth generation glass is the strongest such product on the market as it can survive 1 meter (3.3 feet) drops on rough surfaces and at 0.4 mm, it’s also the thinnest iteration to date. By comparison, the previous version – Corning Gorilla Glass 3 – measures 0.7 mm. The Samsung Galaxy Alpha is one of the slimmest devices in the series at under 7 mm, Corning Gorilla Glass 4 included.

“Gorilla Glass 4 is Corning’s most damage-resistant cover glass to date and dramatically improves protection against cover glass damage during device drops,” reads a press release on the company’s website. “Corning reliability experts examined hundreds of broken devices to assess how and why cover glass breaks in actual use. They found that damage caused by sharp contact on the surface accounted for more than 70 percent of failures in the field. Then scientists developed test protocols to simulate these failures, and a product which could better withstand them – Gorilla Glass 4. Using 0.4 mm Gorilla Glass 4 cover glass allows device designers greater options for sleek and modern devices while maintaining remarkable damage resistance, like in the Galaxy Alpha.”

Corning’s Cliff Hund also mentions that his company spent a lot of time collaborating with Samsung and that the Galaxy Alpha is the direct result of that close partnership. Interestingly, the smartphone was launched back in August but we’ve only now managed to learn that it features Corning Gorilla Glass 4. Although this is the first regular sized smartphone to come equipped with the latest and best protective glass, Samsung has yet another device that can offer this feature. It was recently announced that the highly acclaimed Samsung Galaxy Note 4 phablet also sports Corning Gorilla Glass 4 protection.

I’m Load The Game’s co-founder and community manager, and whenever I’m not answering questions on social media platforms, I spend my time digging up the latest news and rumors and writing them up. That’s not to say I’m all work and no fun, not at all. If my spare time allows it, I like to engage in some good old fashioned online carnage. If it’s an MMO with swords and lots of PvP, I’m most likely in it. Oh, and if you’re looking to pick a fight in Tekken or Mortal Kombat, I’ll be more than happy to assist! Connect with me by email markjudge (@) loadthegame.com only
@@MarkJudgeLTG
Previous Galaxy A5 vs Moto G – specs, features, price compared
Next Microsoft Surface Pro 3 vs MacBook Air 13″ 2014: ultrabook or convertible?