Breaking News
Home » Tech » Diamond Apple Watch will be priced at over $30,000 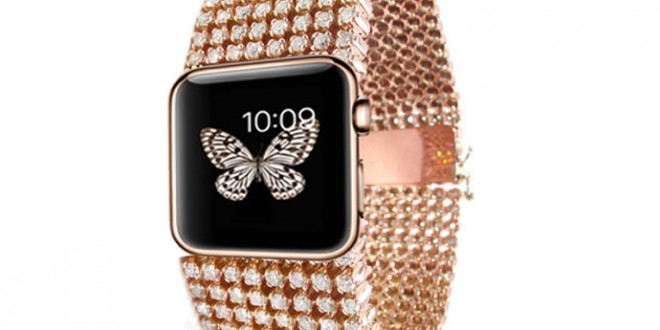 Diamond Apple Watch will be priced at over $30,000

Diamond Apple Watch will be priced at over $30,000

And here I was thinking that a Gold Edition Apple Watch was way too expensive. Nope. A luxury jewelry company announced a new version of the device that makes the gold one look cheap by comparison. Mervis Diamond Importers is now offering anyone the chance to pre-order one of the their diamond-encrusted smartwatches for the tidy sum of $30,150. By ‘anyone’ I obviously mean people who have too much cash on their hands and are looking for ways of getting rid of it quickly. Granted, you could buy a pretty badass car with that amount, but in case you already have one, the diamond Apple Watch is clearly the next must-buy item out there.

Although Apple has not even launched their highly anticipated wearable yet, Mervis is generously allowing you to put down $30K right now and promises that your newly acquired bling watch will arrive by mid-2015. For the aforementioned price tag you’ll get a brand new Apple Watch held together by an 18-carat rose gold frame complete with jealousy-inducing sparkly wrist band that features no less than eight rows of high-grade 15-carat diamonds. A real bargain if I ever saw one. Naturally, the main benefit here is that few people in the world will be able to brag about owning a similar device. Mervis already went ahead and created a concept image depicting the diamond Apple Watch, but let’s hope that this is just an early prototype as the contraption featured in the picture looks far from appealing.

It’s worth mentioning that the Apple Watch will also be available in a couple of other variants. The basic model is not expected to capture the eye of many people, but you won’t have to pay an arm and a leg for it either as it will be priced at a mere 350 bucks. On the other hand, you might have a few more money lying around, in which case you may want to consider the $5,000 gold-plated Apple Watch. No diamonds there though.

I’m Load The Game’s co-founder and community manager, and whenever I’m not answering questions on social media platforms, I spend my time digging up the latest news and rumors and writing them up. That’s not to say I’m all work and no fun, not at all. If my spare time allows it, I like to engage in some good old fashioned online carnage. If it’s an MMO with swords and lots of PvP, I’m most likely in it. Oh, and if you’re looking to pick a fight in Tekken or Mortal Kombat, I’ll be more than happy to assist! Connect with me by email markjudge (@) loadthegame.com only
@@MarkJudgeLTG
Previous WordPress websites are being targeted by SoakSoak malware
Next Hearthstone Now on Android Tablets