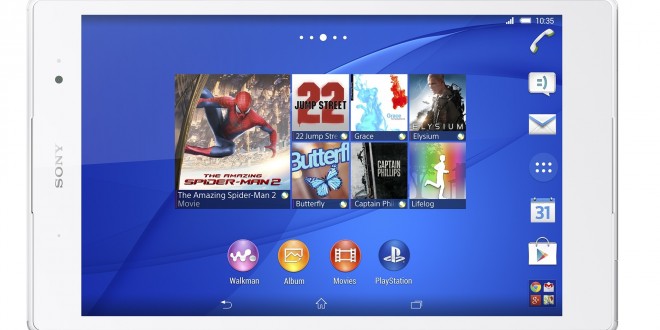 The Sony Xperia Z4 Tablet Ultra release date is reportedly set for sometime in the first half of 2015 and the slate is looking amazing so far. Rumors say that the Xperia Z4 Tablet Ultra specs and price are indeed something to write home about. Even though we haven’t any confirmation from Sony on the slate, we do hope it will make an appearance soon. We might hear some official word about it at CES 2015 or at the Xperia Z4 launch event in January so we’ve got our fingers crossed.

The Sony Xperia Z4 Tablet Ultra specs have been leaked online earlier and the newest leak corroborates the previous suppositions. According to Padnews, Xperia Z4 Tablet Ultra specs include a 12.9 inch display with a 384092400 resolution, powered by A Qualcomm Snapdragon 810 CPU, backed by around 3 GB RAM (even though the original leak suggested 6 GB RAM, that is quite a longshot), 64 GB internal storage, 8 MP rear camera and a massive 12100 mAH battery. Since Samsung has begun the production of the 4GB DRAM memory module that should be ready early in 2015, we might be able to use 4 GB RAM on the Xperia Z4 Ultra Tablet, but 6 GB is a bit far-fetched. The price for tablet has leaked as well, and according to these estimations, we should have to cough up more than $1000 if we want it, which is pretty expensive.

As you can see, the Xperia Z4 Tablet Ultra, if that’s indeed real, will end up being an absolute powerhouse. Rumors say that the release date for the slate should match up to major releases from the likes of Apple and Microsoft, and since we’ve just heard about the iPad Pro and its great specs, the Xperia Z4 Tablet Ultra should be a worthy competitor. We don’t know if IP certification will be part of Sony’s upcoming slate, but if it is, the tablet will indeed be a killer. In any case, we’ll have to hear something or actually witness this slate in action at CES 2015.

My life-long dream has been to test out every gadget on the market! Considering the fact that I've rapidly destroyed almost every gadget I've had so far, I'm not inclined to owning something, so my ideal outcome would be to have a different gadget each month. I'm really into smartphones, wearables and tablets and I love Playstation and Xbox, I'm sure I'll beat you at your own game (after a month of training... or two)
Previous Kodak Android smartphone to be demoed at CES 2015
Next Galaxy S6 leak shows off 5.5 inch display and metal unibody

Sony Xperia M, L and SP are left behind

Sony has decided to pull the plug on some of last year’s releases, namely the ...