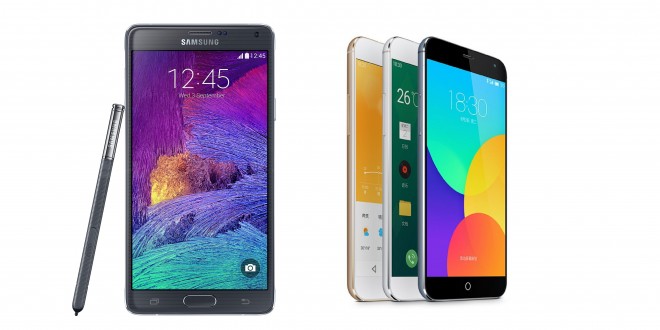 The Meizu MX4 is a recent launch from the Chinese company which has gained quite a lot of popularity in the past few months, thanks to their affordable high-end smartphones. Even though the Meizu MX4 Pro has already been announced and many surprise handsets coming in the future, the Meizu MX4 is out best bet when it comes to high quality Chinese smartphones.

The Galaxy Note 4 is among the latest launches from Samsung, and even though the handset is quite expensive, it packs quite the punch. The Note 4 has become one of the most popular phablets of the year, even though it was first introduced in September 2014 at IFA Berlin. Alongside its more unconventional brother, the Galaxy Note Edge, the Note 4 has become a favorite among tech enthusiasts.

Let’s see how the Meizu MX4 handles serious competition like the Note 4 by comparing specs, displays, features and design. We are curious to see which comes out as a victor in a comparison that aims to determine which phones has greater value and bang for buck. Even though many are wary of Chinese smartphones because of infamous devices of low quality, the Meizu MX4 seems to be game-changer.

Meizu MX4 price and design compared to the Galaxy Note 4

The Chinese handset is clearly aiming to be re-vamped iPhone clone, even though the similarities aren’t bothersome for fans. The Meizu MX4 looks like a blown-up iPhone with the characteristic round home button and even its iOS-inspired skin called Flyme 4.0 OS based on Android 4.4.4 KitKat. The phone has an aluminium frame and plastic chassis, which puts it in-between a premium and a cheap design. The Galaxy Note 4 bears the same build qualities, with a metal frame and plastic chassis, but it differs from the Meizu MX4 in design. The Note 4 has the signature Samsung design with the large, rectangle-shaped home button.

The Meizu MX4 price is the lower among the two, setting you back around $380 unlocked, which is considerably less than what you would pay for an unlocked Galaxy Note 4. Samsung’s latest phablet costs around $700. which is almost double the price of the Meizu MX4. Granted, the Galaxy Note 4 is of superior quality and has more features than the MX4.

Meizu MX4 display and hardware compared to the Galaxy Note 4

The Chinese flagship sports a 5.36 inch IPS LCD display with a 1152*1920 resolution amounting to 418 ppi pixel density, while the Note 4 has a larger 5.7 inch display with a QHD resolution of 1440*2560 amounting to 515 ppi pixel density. Display quality is definitely better on the Galaxy Note 4, with crisper and brighter colors, as well as a larger display.

When it comes to hardware, Meizu MX4 specs include an octa core MediaTek MT6595 CPU backed by 2 GB RAM and either 16, 32 or 64 GB internal storage, with no microSD card slot available. The Galaxy Note 4 comes with the Snapdragon 805 CPU or the Exynos 5433 CPU depending on region and preference, backed by 3 GB RAM and 32 GB internal storage. Even though specs for both these smartphones are great, the Note 4 has better performance results and more to work with, especially since it features a microSD card slot.

Meizu MX4 camera and battery compared to the Galaxy Note 4

The Meizu MX4 features a great rear Sony camera measuring 20.7 MP with an LED flash and a decent 2 MP front camera. The Galaxy Note 4, while it doesn’t have such a large sensor, still features an excellent 16 MP camera outfitted with an LED flash and optical image stabilization on the rear, and a 3.7 MP camera on the front. While both cameras take excellent photos and record great video, the Meizu MX4 camera manages to capture more detail, while footage on the Note 4 looks absolutely noise-free thanks to the optical image stabilization on the rear shooter.

Even though these devices can clearly prove their worth each, the features are what make the deal sweeter for tech enthusiasts. The Galaxy Note 4 features fast charging, an S-Pen Stylus with great functionality, Android 5.0 Lollipop (soon enough), a heart rate sensor, blood oxygen sensor and UV sensor, as well as an Infrared port, fingerprint sensor and NFC. The Meizu MX4 is blander when it comes to features, lacking NFC, Infrared, a microSD card slot and the extra-sensor save for the usual 9 axis sensor.

Overall, you get awesome bang for buck in both cases. The choice between the Galaxy Note 4 and Meizu MX4 has to be made based on software, support and price, which are the biggest things setting these two flagships apart. If you want a cheap phone with a great camera and decent performance, the Meizu MX4 should be your choice (or you can go for the MX4 Pro if you want more). But if you want all the features, quick updates and all the sensors you can think about, the Galaxy Note 4 is your best bet.

My life-long dream has been to test out every gadget on the market! Considering the fact that I've rapidly destroyed almost every gadget I've had so far, I'm not inclined to owning something, so my ideal outcome would be to have a different gadget each month. I'm really into smartphones, wearables and tablets and I love Playstation and Xbox, I'm sure I'll beat you at your own game (after a month of training... or two)
Previous OnePlus One vs Huawei Honor 6 Plus – Cheap and powerful Chinese phablets
Next Motorola Moto G 2014 vs Nokia Lumia 730 – Dirt cheap vs unreasonably priced