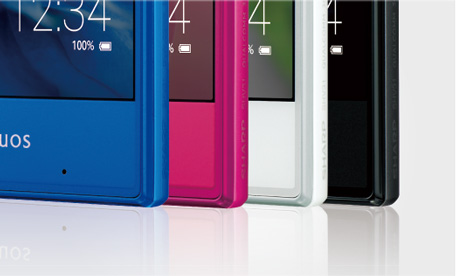 Sharp is famous for the Sharp Aquos Crystal and Crystal X, the bezelless smartphones with affordable price tags. Even though bezelless smartphones haven taken off properly yet, the company is planning to launch another phone taking advantage of the design, as well as a non-conventional clam phone that is surprising neat and functional.

Sharp’s Edgest design will be employed in the newly announced Aquos Mini (model number SHV31) and the handset comes with quite a few nifty features. While the Shard Aquos Crystal X is the high-end version of the flagship, the Aquos Mini is the mid-range offering with a smaller display and similarly bezelless design.

The handset will come with a 4.5 inch display with a generous 1080p resolution and A Qualcomm Snapdragon 801 CPU backed by 2 GB RAM and 16 GB internal storage expandable through a microSD card, 4G LTE, 2,120 mAh battery, 13 MP rear camera with LED flash, 1.2 MP front camera, Bluetooth and Android 4.4 KitKat. One neat feature of the device is Emopa, which is a blend between Siri, Cortana and Google Now and acts as a voice activated assistant.

The other handset, called the Sharp Aquos K (model number SHF31) and it is the more strange of the two releases, employing a clam-sheel design. For such a phone, the design looks quite appealing and premium, just like the bezelless Mini version. It seems that 4G LTE is getting hold of even mid-range offerings from various OEMs, being present on the Aquos K as well. The clamshell comes with a 4 inch 1080p display, as well as the same internal specs, including the Snapdragon 801 CPU. You get 1 GB RAM and only 8 GB expandable microSD card storage, all of it running on a 1,410 mAh battery. The camera setup is the same, with a 13 MP shooter on the rear, but no front facing camera.

The most interesting feature on both these phones is actually the IPX5/IPX7 certification, which makes them essentially waterproof. Pricing and availability hasn’t been disclosed yet, but we suspect the new Aquos devices will come with affordable price tags and will be exclusive to Japan for the time being. Both these phones are interesting releases and we hope they make it as far as the Sharp Aquos Crystal and land in the U.S. soon enough.

My life-long dream has been to test out every gadget on the market! Considering the fact that I've rapidly destroyed almost every gadget I've had so far, I'm not inclined to owning something, so my ideal outcome would be to have a different gadget each month. I'm really into smartphones, wearables and tablets and I love Playstation and Xbox, I'm sure I'll beat you at your own game (after a month of training... or two)
Previous Lumia Denim update rolling out for all
Next Elon Musk thinks it’s important to have internet on Mars as well

Samsung has listened to feedback from customers and has consequently cut the prices of the ...