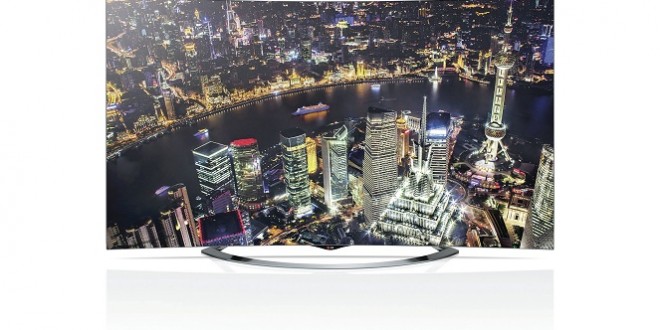 Screens have undergone a serious makeover in the past year. Whether it’s a top-tier smartphone boasting a 2K resolution backed by Super AMOLED tech, or the sexy new curves of the latest TV’s, it’s clear that screens aren’t the same large grey boxes we once knew them to be. Next year is set to continue to spoil us, providing subtle improvements to the screens we know, as well as a whole new round of svelte screen technologies.

One tech company leading the charge needs no introduction. Samsung have impressed us with their Galaxy S6’s screen for just over a month now, and they’re gearing up to do the same with their next generation of devices. Consumers first got their taste of Samsung’s Youm technology when the Samsung Note Edge was released back in 2014, but is set to be a focal-point for the company next year. First announced back in 2012; the curved displays have promised better ergonomics and enhanced durability from accidental falls. It also dazzles users with a rich-array of colours, thanks to its reliance on AMOLED display technology.

Samsung have wrestled with the best way to implement to get use out of the curved displays. Despite its best efforts, the curve is more of a novelty than the next step of screens. That hasn’t stopped the South Korean company from driving the tech forward. Fully-flexible displays will touch down in Samsung devices next year, perhaps filling in the missing link between fad and must-have feature. Maybe their next iteration of the Galaxy Gear wrap will around our wrists; though its place in smartphones is less clear. LG’s G4 and Flex 2 have curved displays for improved ergonomics whilst making calls, Samsung may be able to change the nature of the curve at will, which would give it a competitive advantage.

Other companies have taken innovative approaches to using the shape of the screen to differentiate themselves. Sharp isn’t the first name that comes to mind when you think of striking designs, though that all changed with the release of the Aquos Crystal. Its border-less display had never been seen before, and it looks like its competitors are set to take this further. Oppo, one of the world’s largest Chinese manufacturers, unveiled the Oppo R7, a new phone with a slightly curved bezel – leading to an eye-catching bezel-less design. Reports of the company’s efforts to create a bezel free screen go back to last year. The new product will finally be released later this month (though an international release hasn’t been set). Unfortunately, the Oppo R7 still has a regular sized chin and forehead, but hopefully more manufacturers will more faithfully recreate Sharp’s design. Even smaller companies are joining the bandwagon, with Chinese manufacturer Nubia, freeing consumers from bezels. The Nubia N9 encourages the playful use of its sides, which, although slightly gimmicky, adds functionality to its attractive design. Still, there are other ways of putting the screen front and center. Whereas company’s like Samsung and Oppo have turned heads with the size and shape of their screens, other have taken the old-fashioned route of delivering cutting edge performance.

Quantum dot displays are featured on Amazon’s Kindle Fire tablets and LG’s latest flagship, the G4. It boasts higher peak brightness, more saturated colours, better colour accuracy, and even improved battery life on mobile gadgets. The tech is set to become a staple in premium TVs and LCD-based mobile phone screens, but what exactly is it? Quantum dots are smaller pixels which emit light according to their size; smaller pixels will emit a blue light, whereas larger ones appear red. The result? High dynamic range technology, coming to the next round of Smart TV’s. Vivid hues and rich tones will mean that Game of Thrones will make your jaw drop for reasons other than the red wedding (or any George RR Martin run event for that matter). In short, the technology is similar to Super AMOLED technology, but retains the colour accuracy of LCD panels.

Although the technology is a step in the right direction, Quantum displays have some drawbacks, one being its finicky backlight bleed issue. The Kindle Fire HDX illustrates this perfectly, donning an unsightly hue around the displays outer boundaries. It’s not enough to detract from the technology’s pros, and with Apple reportedly holding patents on how to address the issue, it seems that even this issue won’t persist.

4K screens (I bet you were wondering when this would pop up), are set to touch down by the end of this year – if rumours are to be believed. As if the vivid detail offered by 2K phones wasn’t enough, next year will feature even more pixels crammed into your pocket sized device. Sharp have announced a 5.5 IPS display, featuring a full 3,840 x 2160 resolution (close, but not quite 4k’s 4096 x 2160 resolution), planned to outfit next generation devices by the end of 2016. If Samsung manages to stick to its 2013 business plan, we may even see them by the end of this year with the advent of the Note 4’s successor.

It seems inevitable then that UHD displays are the future, but whether they make sense for mobiles right now is questionable. 2K phones already have difficulty chugging along for a full day, which Samsung have somewhat remedied by implementing fast charge into its flagship devices.  Experts suggest that the human eye cannot resolve the individual pixels of these high-res screens, with Apple setting 326ppi (pixels per inch) as their cut-off point. Whether pushing resolutions further will be fruitful still remains to be seen. The average consumer may notice their phone running out of juice more than those extra pixels, at least until battery technology catches up.

Phones aren’t the only devices which are set to see massive changes to the technology underpinning its screens. Unlike phones, PC monitors have improved massively, but not because of its shape or display accuracy. Both Nvidia’s G-sync and AMD’s Freesync technologies solved frame pacing issues which plagued gamers for years. The jarring judder experienced when the screen receives a new frame after it refreshes, disappears thanks to the brilliant tech. It comes at a cost, but more affordable gamer-orientated displays intend to make these more accessible to the masses. More excitingly, the bandwidth issues which have prevented g-sync and freesync from finding its way into ultra-resolution screens have disappeared. Want something adventurous? The Acer XR341CK(A) have you covered. Its available in either Nvidia or AMD flavoured frame-pacing variants, and boasts a 34” 3440 x 1440 curved IPS display. It has a 75Hz refresh rate too. Basically, it’s beautiful; and it’ll be perfect for gaming too, providing silky smooth responseiveness. Its size makes it impractical for the average person, but the massive screen offers incredible immersion (for those willing to set down the cash for it). It’ll be £899 for the Freesync model, and £999 for the G-sync model, and is expected to touch down later this year.

High Dynamic Range (HDR), is familiar to most people. Almost every modern camera will have the feature available, creating more saturated and contrast-rich images. The same applies to TVs. A greater range of colours are displayed on a HDR display, thanks to the TV’s ability to output a greater spectrum of luminance. It’s been hailed as a more noticeable advancement than 4k, and for good reason – it looks stunning in action. But to take advantage of the enhanced colour production on these high-spec tellies, you’ll have to feed it HDR content. If you think that lack of support will be its downfall, don’t worry; there are many sources for HDR content available right now. All of the original content on the streaming site Netflix, such as Marco Polo and Daredevil, are HDR enabled, and it has stated that shows originally shot on standard cameras can be altered to enable HDR. Amazon Prime subscribers are also expected to get their hands on the added depth of colour, later this year. The new 4k-enabled Blu-ray discs have also specified support for HDR.

Adoption of HDR content is dependent on a number of factors, one being HDR-enabled screens. Displays capable of showing the increased range of colour needs to be able to output brightness levels at a peak luminance of 800 nits. To put that in perspective, the average television has a peak luminance between 200 and 400 nits. Nearly every TV released from now will have HDR as standard, so its adoption will be an inevitability rather than a precarious one – so no dodgy 3D support here then.

Screens have been improving for years, with Apple setting the trend for eye-scorching detail on mobile devices with the release of the iPhone 4, back in 2010. Since then, companies have taken every step to outdo one another, leading to the advent of newer and more vibrant screens. We don’t know what the future of devices will be, but with these new developments over the horizon, its beauty is certain.