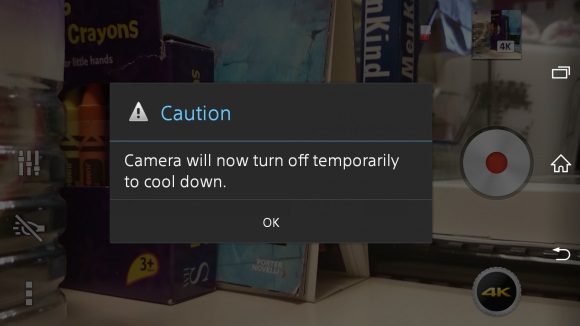 Sony has addressed the Sony Xperia Z3 overheating problems that occur when shooting 4K videos a while ago, but even though the company made an official statement the problems didn’t cease. Sony advised users of the Xperia Z3 to refrain from shooting 4K videos for longer than 2 minutes at a time, which is kind of redundant. 4K has been put into the Xperia Z2 and Xperia Z3 as a feature, but what good can it do if one can’t make effective use of it?

The cop-out explanation of the company emphasized that there isn’t any concrete way to avoid the Xperia z3 overheating when shooting 4K video as the feature puts enormous strain on the processor and GPU within the device. Not all Xperia Z3 users are reporting the same problems on various forums. Some say that 4K video recording is a pain, as the phone overheats within minutes and shuts the application down.

Until the Android 5.0 Lollipop update hits the Xperia Z3, users will most likely be confronted with overheating issues. One diligent forum member suggested that since the Xperia Z3 is waterproof, you should dunk it in cold water when it overheats. No, you shouldn’t do that, because the abrupt change in temperature will most likely damage your phone or crack your display.

My life-long dream has been to test out every gadget on the market! Considering the fact that I've rapidly destroyed almost every gadget I've had so far, I'm not inclined to owning something, so my ideal outcome would be to have a different gadget each month. I'm really into smartphones, wearables and tablets and I love Playstation and Xbox, I'm sure I'll beat you at your own game (after a month of training... or two)
Previous Best Microsoft Surface Pro 3 cases on the market
Next iPad Air battery life short review