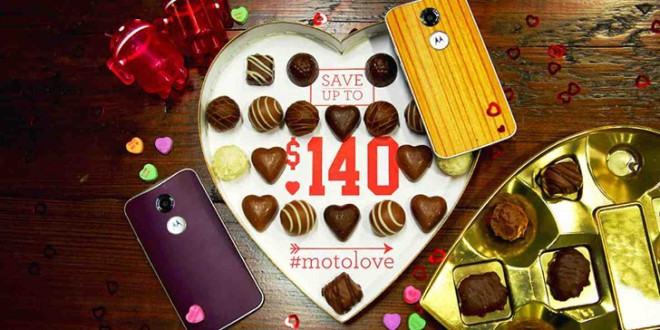 Get the Moto 360 cheaper for Valentine's

Moto 360 will be cheaper for Valentine’s with promo

Motorola has announced that it would be holding a massive sale to celebrate Valentine’s Day, as well as the good reviews most of their devices have received in the past few months. The Moto 360 will be part of this sale, as only the Nexus 6 is excluded. The idea behind the sale is that you can get some promo codes starting February 2nd which will grant you $140 off for a purchase above $500.

This season seems to be the best to stock up on the Moto 360 smart watch and the Moto X 2014, both of which come with excellent customer reviews, as well as great popularity and features. The Moto 360 is the most popular round smart watch running Android Wear and many are saying that when the Apple Watch will be launched in April, it won’t be a match for the Moto 360 and we are inclined to agree.

The Motorola promotion isn’t the best one we’ve seen, but it certainly comes with great benefits. If you manage to sign up for the promo code (there are only 200 thousand available) then you can get $140 off your purchase of $500 or $50 off of a $250 purchase. If you are late to the game and don’t get to sign up for the promo code, you will have a similar discount available on February 3. The second promotion says that you will get $100 off any $500 purchase, without a promo code and $35 off any purchase of $250.

If you are jonesing for a tech upgrade for yourself or your Valentine, the Moto Store promo seems like a good choice, as you can bundle two gifts to benefit from a great discount. I would definitely recommend the Moto 360 as a gift for any Android owner, as it stylish as well as functional, just perfect for a Valentine’s Day gift. The Moto X 2014 would also qualify as a good present, as it is one of the best affordable flagships of the past year. The promotion is only available for U.S. customers, though. Good luck!

My life-long dream has been to test out every gadget on the market! Considering the fact that I've rapidly destroyed almost every gadget I've had so far, I'm not inclined to owning something, so my ideal outcome would be to have a different gadget each month. I'm really into smartphones, wearables and tablets and I love Playstation and Xbox, I'm sure I'll beat you at your own game (after a month of training... or two)
Previous Best iPhone 5S and iPhone 4S cases on the market
Next Microsoft Lumia phones coming to the MWC

The Moto Maker platform has been one of the best services for those who want ...