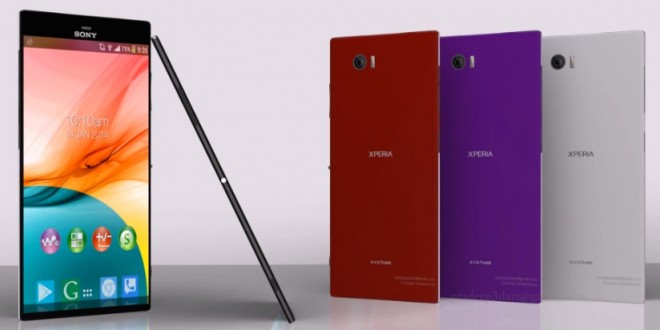 The Sony Xperia Z4 is expected to make an appearance at the Mobile World Congress in March, to be held in Barcelona, Spain. That’s good news, as many are curious to see how Sony intends to change its smartphone line-up. The company was confident at one point that their 6 month release cycle would come to an end this year. That looks like a possible development, as revenue reports showed an increase in the number of Xperia smartphones sold in 2014. Sony managed to sell more than 12 million Xperia devices in the last quarter of 2014, which is a considerable increase compared to previous years. Now the Sony Xperia  Z4 is the next big thing, and we’ve a new leaked image of the front panel of the device, pointing towards a new design language that might sit very well with users.

The leaked Sony Xperia Z4 image shows the front panel of the upcoming powerhouse, and judging by the slightly rounded edges, indiscernible display edges and matte look around the frame, we’re in for something new. Many have criticized Sony for using the repetitive glass design on their flagship, and it looks like the company listened this time. While we can’t be sure if this in fact the Sony Xperia Z4 chassis, we are inclined to hope it is. If you’re familiar with the OnePlus One, then you will recognize a bit of the design elements on the front panel of the Sony Xperia Z4, with rounded corners and a sleek design.

The Sony Xperia Z4 will be the best in the new line-up, according to various leaks and rumors, and many were hoping for a design overhaul. Although the difference between the Xperia Z3 and the alleged Sony Xperia Z4 front panel isn’t too big, but it’s certainly noticeable. We’re seeing slightly rounded edges on the side of the right side of the phone, although it doesn’t look like an edge display like we’ve seen on the Galaxy Note Edge. That still points towards thin bezels on the Sony Xperia Z4 and an overall higher screen to body ratio. Even though the image of the chassis sin’t clear, we can see that the bezel on top of the Sony Xperia Z4 display is about the same size as it was on the Xperia Z4, but we’re barely noticing any bezel on the edges and on the bottom of the phone, so we might be looking at a great design right here.

Alleged Sony Xperia Z4 specs include a 5.3 inch FHD display, Snapdragon 810, Android 5.0 Lollipop, 4 GB RAM and a pretty big battery between 3000-4000 mAh. Naturally, the phone should be waterproof and the USB ports should be made with a different technology so that we won’t see any unaesthetic flaps around the phone. We’re looking forward to seeing the flagship at the MWC 2015 and we’re hoping for the bezelless design! How about you?

My life-long dream has been to test out every gadget on the market! Considering the fact that I've rapidly destroyed almost every gadget I've had so far, I'm not inclined to owning something, so my ideal outcome would be to have a different gadget each month. I'm really into smartphones, wearables and tablets and I love Playstation and Xbox, I'm sure I'll beat you at your own game (after a month of training... or two)
Previous HTC One M9 with Windows 10 set to launch in the U.S.
Next Moto E Android 5.0.2 Lollipop soak test begins