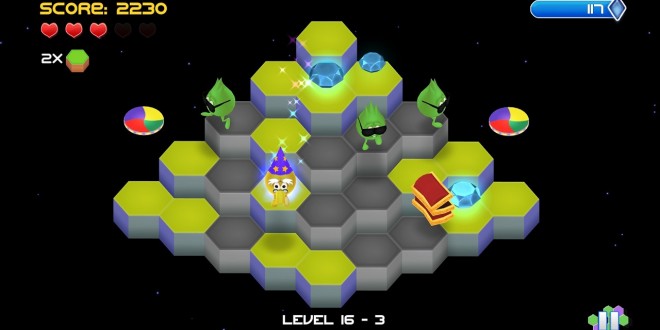 Reboots, remakes and re-releases of classic games have become an important part of the current generation of video game consoles. It is no surprise that a classic arcade title will be joining the library of PlayStation games. Q*Bert Rebooted will be coming to the PS4, PS3 and PS Vita consoles. Fans of the series will be getting two games for the price of one with this title. The original game will be paired with a “completely reimagined Q*Bert game” in this bundle.

The original Q*Bert title was released in arcades in 1982 by Gottlieb, an arcade game developer from Chicago. The original developer didn’t survive past the 1990’s, however Q*Bert has not been forgotten. This action title forces players to think strategically. Players control the titular protagonist, as he starts at the top of a pyramid and must change each cube to the desired color. The earliest stages don’t present much of a challenge. Q*Bert has to jump on each cube once to change its color. Players will have to start thinking about their movements, as subsequent stages will require the loveable character to land on each cube twice. Gottlieb combined that with cubes that change color every time Q*Bert lands on them to make a challenging and exciting game.

No action title is complete without enemies to thwart out valiant hero. Coily is an egg that bounces to the bottom of the pyramid. There it turns into a snake and starts chasing after Q*bert. Ugg and Wrongway won’t be chasing the fun character, however they may be a problem to deal with. They move along predetermined paths, until they fall off the pyramid to their deaths. Slick and Sam will move from the top of the pyramid and revert the color of cubes. Players must learn to deal with these enemies and avoid falling off the pyramid, if they want to succeed.

“Instead of cubes, Q*Bert Rebooted features hexagons. That may not sound like a game-changer, but it is. Suddenly, you get some really interesting level designs, especially later in the game.” – an excerpt from the PlayStation Blog post

Q*Bert Rebooted will feature a pyramid with hexagons instead of cubes. This title will include some great new features, like time and score challenges, new enemies and playable characters, power-ups, traps and gem-collecting. Fans of classic arcade titles will enjoy how challenging the game will be. It will be hard, however it will still allow the “casual user” to enjoy it. No release date or price has been announced for Q*Bert Rebooted, however fans of the game may not have to wait much longer to hear Q*Bert’s “swearing.”

I'm a gamer and a massive fan of anime. I'm a massive simulator geek. Who isn't? Simulators offer me the opportunity to experience something I wouldn't otherwise. Have you ever driven a train? I haven't, and I probably never will. However Train Simulator 2015 gives me the opportunity to experience what it might be like. I'm also a big train and space exploration geek.
@ivanmashkov
Previous Monday is the day for T-Mobile HTC One M8 owners
Next Hunting Ground Announced For Secret Ponchos