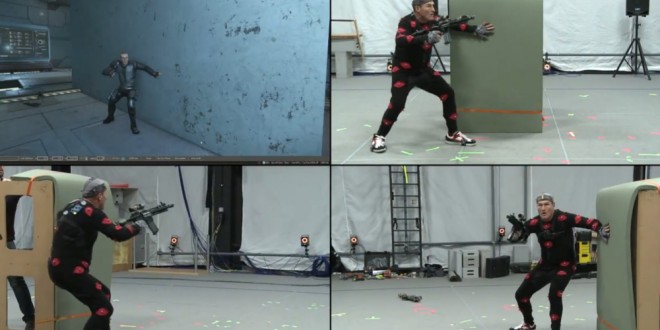 A new video released by Coud Imperium Games today gives insight into how the developer’s upcoming open universe space simulator, Star Citizen, will incorporate motion capture into its design. This behind-the-scenes footage highlights how motion capture specialist, The Imaginarium Studios, will use the technology to bring characters within Character Citizen’s Persistent Universe and its singleplayer campaign – Squadron 42 – more life.

The nearly eight-minute long video introduces a number of leads who are heading the motion capture aspect of the game, such as The Imaginarium Studios’ head Ben Lumsden and Cloud Imperium Games’ lead level designer Michael Barclay. Lumsden expresses his excitement to be working with Star Citizen’s developer in motion capture early on in the video, especially since The Imaginarium Studios will be contributing to Star Citizen’s development. Cloud Imperium Games’ animation director, Steven Bender, believes that motion capture and performance capture will help create a realistic world, suggesting that could be used to convey the behaviour of citizens in a city, particularly if the city is wealthy or religious. “That gives us the ability to make a whole lot of content, and to make unique experiences on each planet,” he adds.

During the motion capturing process, The Imaginarium Studios streams performances – as they happen – into Star Citizen’s game engine, CryEngine. By using our pre-visualization tools, the motion capture house redirects the scene mapped by its capturing equipment “straight into a motion builder, which in itself then streams to the [game] engine,” Lumsden explains. Through this, the developers are able to “see, in real-time, [motion captures] very close to the final result” thanks to this process. It also helps in realising how characters will interact with their surrounding environments, and whether or not tweaks need to be made to them.

“The thing that motion capture gives us, especially with human characters (and in our combat, in our Persistent Universe and things like that), is that it allows us to work with experienced actors and talent that are able to bring their personal experiences and their personal knowledge to whatever it is that we’re doing,” Bender comments. Another thing that motion capture will allow Cloud Imperium Games to explore is how the various aliens of the Star Citizen universe will behave as well, such as the Vanduul. The full behind-the-scenes footage can be viewed via the embedded video below.

The crowdfunding effort behind the titanic that is Star Citizen is still ongoing, even though the game has already reached and surpassed $72 million. Chris Roberts, the creator of the game, believes that Star Citizen will reach $100 million by the end of this year. He also confirmed that Star Citizen would commercially release sometime in 2016. In between then, Cloud Imperium Games will be working on the Beta release of the game’s first-person shooter and Planetside modules, as well as its multi-crew update for Arena Commander, and the Persistent Universe Alpha for Star Citizen backers. The first episode of Squadron 42 will be released during this time, too.

Preferring to be referred to as "KingSongbird", Kieran is a serious, yet laid-back person with a particular soft spot for RTS games and anything Sci-Fi.
@KingSongbird
Previous Rebellion Releases New Trailer For Zombie Army Trilogy
Next Twitch Will Host Brand-New Gaming Convention This Fall

Star Citizen has already reached $63 million in funding and is now rapidly cruising towards ...