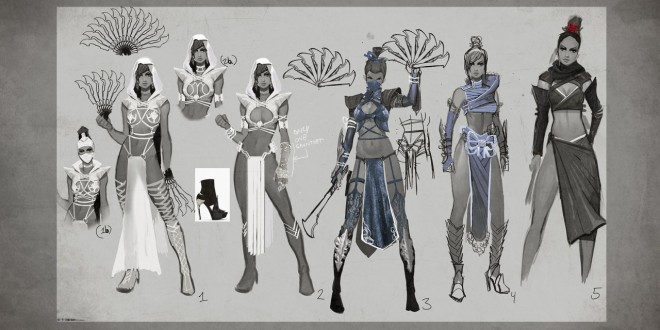 Kitana’s MK9 traditional outfits were shown as well as some artwork detailing the characters past, and even some new ideas that NetherRealm had drawn up of her. One of Kitana’s new moves is a tornado spiral that reflects projectiles that are thrown her way. It was also announced that Jade will not be making an appearance in MKX and because Kitana “misses” her friend, she has taken up her skills and move sets which the  player can use.

Reptile art was also shown, and the developers explained why they decided not to use certain costumes like one that included a tail. Reptile’s fatality was shown and it was disturbingly brilliant. He spits acid in the face of his opponent, then with ease as their skin melts, he grabs the opponents skull and splits it in two with his hands. Reptile also will hurt the opponent by simply standing near them because of his acid aura.

The crossroads stage was also revealed and it was said that it will be a key story location for players. The crossroads practically is a hell based stage where bodies can be ripped from walls and then can be used as projectiles to harm your opponent ala Bruce Wayne’s cars in the Wayne Manor stage in Injustice.

NetherRealm announced that they will be doing more Kombat Kasts up until Mortal Kombat X’s launch date of April 14 when it releases for Xbox One, Xbox 360, Playstation 4, Playstation 3, and PC. You can check out the Twitch video below as well as some more artwork of Kitana and Reptile. Hi I'm Daniel and I'm an aspiring writer, avid gamer, and wanna-be cook; I'm not quite certain in which order. I like all things RPG and if that means swords n' spells, all the better. But, provided it has a good story I'll probably want to try it regardless of what it is. I'm a Windows junkie, and I spend my time gaming on Xbox, PC, and my 2DS.
@@danielcooper179
Previous Evolve: How to Get Started
Next The Order: 1886 Trumps Evolve in Top UK Charts