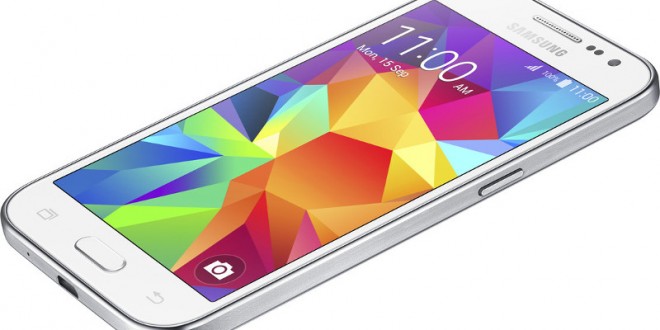 The Galaxy Core Prime will be at Verizon on Thursday

Verizon will start carrying the Samsung Galaxy Core Prime starting Thursday, February 26. Verizon has made the announcement today, without too much hype around it, as the phone isn’t much to write home about. Even though Samsung promised that it would cut back on the smartphone models they release, it seems that plan isn’t working out too well, with more than 14 models, all within mid-range categories launching recently. The Galaxy Core Prime is yet another mid-range offering and it will have an accordingly mid-range price. Verizon will price the Galaxy Core Prime at $30 with a two-year contract.

The Galaxy Core Prime will not be too impressive, but it will be a decent mid-range phone fit for daily use for the average smartphone users. As such, the phone will have a 4.5 inch WVGA (480*800) display, which is not optimal, but it is enough for decent viewing of videos, photos and text. The handset will be powered by a Snapdragon 410 CPU clocked at 1.2 GHz, backed by 1 GB RAM and 8 GB internal storage. You’ll also get a microSD card slot in the phone, which can support cards with up to 64 GB of extra storage, which you will most likely need to store your media files as 8 GB is not much nowadays when it comes to internal storage.

Samsung decided to make the Galaxy Core Prime as average as possible, so it slapped a 5 MP camera on the rear, equipped with an LED flash and autofocus, and a 2 MP camera on the front. You won’t get much out of these cameras, but they’re good for the occasional snapshot or selfie. The battery measures 2000 mAh and there is also an LTE enabled version of the Galaxy Core Prime, although that’s probably not the one being launched by Verizon on Thursday. Android 4.4.4 KitKat will be running the show, so don’t expect too much Material Design on the phone just yet. You do get TouchWiz on it, though, which is either a positive or a negative, depending on your preference. Fact of the matter is you can get a Galaxy S4 with $50 on a two-year contract, so we’re not sure how well the Galaxy Core Prime will fly in the U.S. once it is launched.

My life-long dream has been to test out every gadget on the market! Considering the fact that I've rapidly destroyed almost every gadget I've had so far, I'm not inclined to owning something, so my ideal outcome would be to have a different gadget each month. I'm really into smartphones, wearables and tablets and I love Playstation and Xbox, I'm sure I'll beat you at your own game (after a month of training... or two)
Previous OnePlus One CM12 S official delayed, as well as OxygenOS
Next Activision May Announce New Guitar Hero at E3