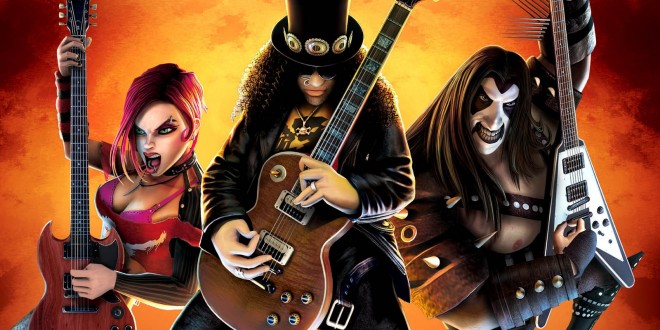 According to sources, Activision currently has a new installment of Guitar Hero in development, presumably to be announced at E3 for a release later this year. The last Guitar Hero game, Warriors of Rock, was released back in 2010 for PlayStation 3, Wii, and Xbox 360. By that time, the music game fad was fading out and Activision chose to bring an official end to the series in 2011. The two studios that worked on Guitar Hero after its acquisition by Activision- RedOctane and Neversoft- have also since closed. If the company has changed its mind on the series, it’ll have to find new partners on the project.

The game is apparently being made for the PlayStation 4 and Xbox One. New guitar peripherals compatible with the new consoles are also in development. While Guitar Hero has always been distinctive for its cartoonish, exaggerated style, the new game is rumored to take a more realistic approach to design with both the crowds and performers looking more like actual people. There’s no word on what types of music might be featured- it might be interesting for more modern songs to make an appearance in the franchise in addition to the classics that usually fill the music options.

When an Activision spokesperson was contacted for comment by Kotaku, there was no confirmation or denial. The spokesperson instead merely reiterated that “as one of the most beloved entertainment franchises, we would only bring Guitar Hero back if we developed the right innovations to usher the franchise into the new generation of gaming.” It’s worth noting that there have also been rumors that the Harmonix Rock Band franchise might see a revival for the PlayStation 4 and Xbox One as well. The music gaming genre could be seeing a revitalization if either (or both!) of the rumors turn out to be true. E3 is not until June, however, so we’ll just have to wait and see how everything works itself out.

Emma is an aspiring something-or-other with a love for video games fostered since childhood. She is more prone to rage-quits than she would like to admit. In her spare time, she runs her own blog and writes creatively.
@back_Paq_ing
Previous Verizon Galaxy Core Prime launching on Thursday
Next Shadow of Mordor – The Bright Lord Is now Available on PlayStation