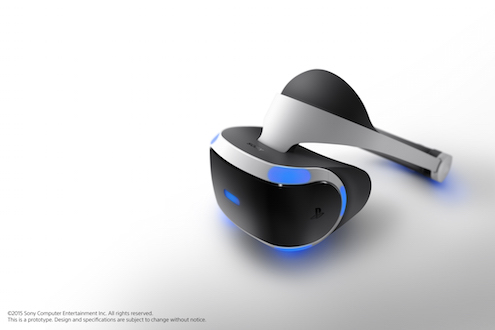 Sony has revealed the released window for the Project Morpheus virtual reality (VR) headset. The company’s first foray into VR technology will be available for purchase in the first half of 2016. The electronics giant has also revealed a new iteration of Project Morpheus that features a doubled refresh rate and additional tracking LEDs. This newest iteration of the headset is designed to be more comfortable and includes a quick release button. No new details have been announced for the Oculus Rift, however both headsets remain the frontrunners in the race to deliver the best virtual reality experience.

Project Morpheus has the potential to bring virtual reality to a wider audience due to the lower barrier to entry. The headset is expected to require a PS4 console in order to play games. This stands in contrast to the Oculus Rift, which requires a fairly powerful desktop PC. As a result, Project Morpheus may end up requiring the least financial investment with a $400 PS4 console. For comparison, the Samsung Gear VR requires a Galaxy Note 4, which is sold at retail for $700. No specific minimum requirements have been announced for the Oculus Rift development kits, however the manufacturer is concerned about prices.

“And that really becomes the gating factor. Because if everyone can afford the $350 headset but then you need a $2,000, or a $1,000, computer that’s a huge cost. So that is one of the biggest challenges we have, moving into the consumer market. And something we’re worried about.” – an excerpt from an interview with Nate Mitchell, VP of Product, Oculus VR.

There are some similarities between the current boom in VR technology and the hype surrounding motion controls at the start of the decade. Console manufacturers focused heavily on motion controllers after the incredible popularity of the Wii, however they didn’t live up to expectations.  This has been attributed to the lack of manufacturer support and the limited library of titles that support the technology. Existing headset manufacturers may be able to use this experience to bring virtual reality technology to a mass market.

I'm a gamer and a massive fan of anime. I'm a massive simulator geek. Who isn't? Simulators offer me the opportunity to experience something I wouldn't otherwise. Have you ever driven a train? I haven't, and I probably never will. However Train Simulator 2015 gives me the opportunity to experience what it might be like. I'm also a big train and space exploration geek.
@ivanmashkov
Previous Sony Announces March Free Games Lineup For PS Plus
Next Galaxy S6 price revealed, not as expensive as we thought