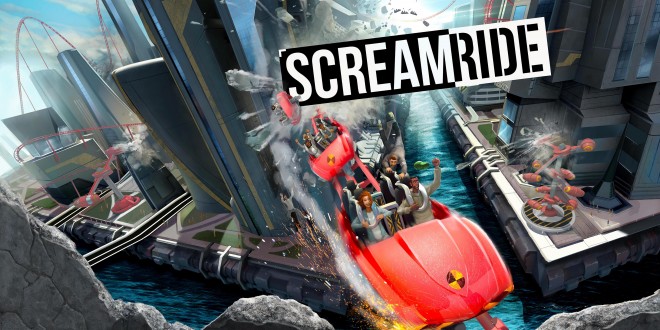 Screamride doesn’t do much to challenge RollerCoaster Tycoon in any in typical sense, but it does challenge the way we play these types of games. You won’t be able to open your own park up, you can’t see customer feedback, and you can’t trap people on a deserted island waiting for them to slowly starve to death. What you can do though is creative some insane roller coasters and not only watch how they play out, but also control them and steer them through obstacles. Screamride challenges the way we play and the way we create in many senses and while it may be unrealistic, it is also worthy of your attention though. I don’t think Screamride is the best game in the genre, but it does have a unique approach to it and it has some great ideas. The biggest concern walking in to Screamride for me was its price tag. Priced at $40 for the Xbox One, which concerns me as it is the same price as Zoo Tycoon and $40 is a rather steep price to pay for a game that some may view as an Xbox Live Arcade game.


I actually remember my first roller coaster. I remember how eager I was as we waited in line, I remember the regret as it took off, I remember shrieking my tiny head off, and I remember clutching my father’s arm so tight he said I almost broke it. The reason I continue to ride them is fairly simple. I love the adrenaline. I am a 22 year old male who can ride these behemoths yet I can’t go to the top of a Lighthouse. I am scared of heights yet my love for roller coasters is still very much so real and is due to the adrenaline rush. I somewhat feel this rush while playing Screamride, I find myself leaning from left to right during the turns on the ride and shouting at appropriate times. During my time with Screamride I have found myself more immersed than I have been in any other game like this. With Screamride I’ve screamed, I’ve laughed, I’ve crashed, I’ve succeed, I’ve cheered, I’ve been downright confused, and I have definitely enjoyed my time overall. This isn’t to say that Screamride isn’t without its fair share of annoyances and issues though. 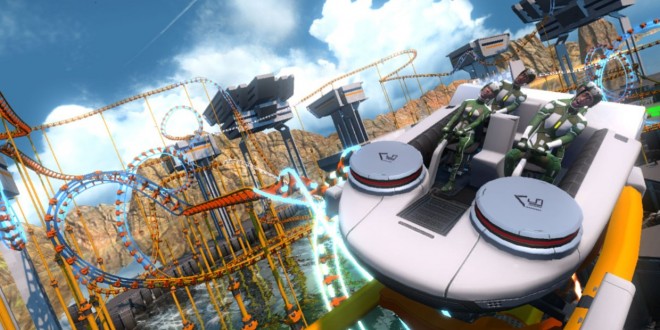 Screamride has a career mode and sandbox mode for you to enjoy. In these modes you can choose from Screamrider, Demolition, and Engineer. In Screamrider you have control over the coaster and have to navigate your audience safely from point A to B. You can achieve bonus points for doing things such as grinding on two wheels, perfect turbo collection, perfect start, and not crashing once. Screamrider has some difficult obstacles for you to tackle and overall control the coaster is a delight and can be pretty difficult at times. Demolition has you either throw balls or trains at buildings in the hopes of doing as much damage as possible. This mode is a mode where you want to sacrifice your people as the balls and trains actually have people inside of them… for some reason. Engineer has you build a roller coaster with some restrictions, you need to do a number of things to complete the requirements such as length, average screams, special pieces, height, etc etc. The 3 modes in Screamride are all fairly unique and fun to play for various reasons. The unrealistic part also comes to play in these though, it is rather cartoonish though, so I didn’t expect much realism in the game itself. I mostly had trouble with the Engineer part of the career, where I made ridiculous coasters that people would fly out of, although they have the bar and belts to protect them. The complaint isn’t that really, it is them flying out of a coaster going 100+ miles per hour, slamming in to a building, and they are fine afterwards. I don’t expect to see explode like he should have, but I would be fine with implied death. The weakest link of the three modes would be Engineer, it keeps you restrained and expects you to enjoy building a watered down coaster set to very specific needs. Screamride shines with Screamrider and Demolition modes, but Engineer falls short. It feels like you are given a box of Legos and expected to only build what the package wants, but everyone knows that the best part of Legos is your ability to do whatever you want with them. While Engineer feels somewhat like a bust, Screamrider and Demolition do a good amount to defend Screamride. Demolition feels like a much more difficult Angry Birds and Screamrider is intense and puts me deep in to the game. I will give them some credit on the Engineer mode though, it does bring up some interesting puzzles. 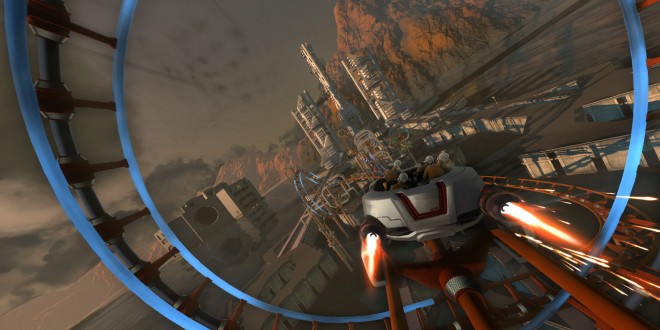 Screamride also has a Sandbox mode and allows the player to share and create levels. Screamride’s online is a feature I have not encountered yet sadly, but the Sandbox mode is fairly a fantastic idea in itself. Sadly, Screamride doesn’t allow you to fulfill your most wildest of dreams with an endless map, but it does allow you to do a good amount of things. During my time in Screamride’s sandbox mode I discovered that the learning curve is rather steep for a child’s game, it did not baffle me for long though, but one feature was missing. I am not sure if Screamride actually allows you to edit your ride after you test it, because I found no way to do so. After I placed a novelty piece and wanted to see what it did, it threw the train in to the water and then didn’t allow me to edit the coaster again even after loading the map back up. I am not sure if this was a glitch or what, but if the feature is missing in Screamride then it takes a substantial amount out of the Sandbox mode and hurts it significantly. Really this might be the weakest point of the game,when you enter Screamride you will have memories RollerCoaster Tycoon, this is because of the game and the company. Sadly though the Sandbox mode just does not deliver and it ends up a fraction of what you should be able to do. You’re limited and while you can make some great rides, the potential is a fraction of what it could truly be. You can still create some fantastic tracks, but the maps are far too limited and need to be unlocked. The biggest I’ve seen is 600x600x200, which may be sufficient for most, but with a with a game like Screamride I wanted more, I wanted it to be bigger and crazier. The mode restricts me from creating the biggest and most insane coaster ever. 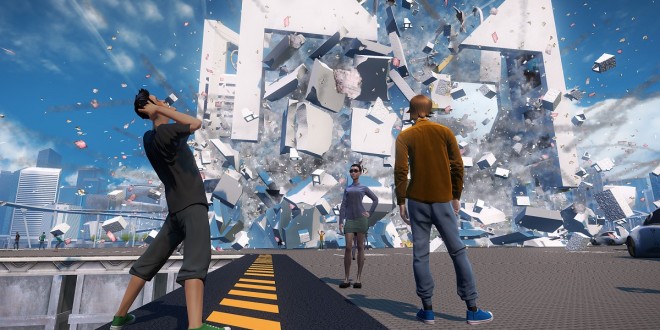 Screamride does have fairly pretty visuals as well, the people and locations have a unique style that I rather enjoyed. Screamride won’t have you starring off distantly for hours (unless you are puzzled) but the game is rather attractive . One of desires is blood and gore, but I say this for just about every game that makes me laugh, because I think it would make the shock and laugh factor stand taller. Screamride won’t add gore, it is a rather ridiculous demand on my behalf, but if you examine the the tracks and scenery they are fairly pretty to look at. I can’t say I am 100% enthralled with the surroundings and the tracks seem to always be this odd orange color that I can’t seem to change, but the game looks neat. The best part would be the camera angles and the faces of the people, it is rater fascinating to watch the faces during an intense coaster or flying out of it.

The music is actually pretty well done in the game as well. I remember streaming it for my friends and hearing them comment on that section of the game stating that the music was actually pretty good for this game. I failed to notice the music until that point, because most of the time I was engrossed with the game and focused on the task at hand. The music in Screamride is pretty good and fits rather well though. Truthfully though,the worst part of the audio for Screamride comes rather often and it is this loud obnoxious noise this happens whenever a rider flies out of the coaster. It isn’t needed and it happens all the time unfortunately, it also takes your camera away for a split second to show them flying out, which also annoys me. I don’t think people will scream for Screamride’s soundtrack, but it is still pretty good overall. One feature in the game that may not go unmentioned is the humor. It is rather funny to watch the people’s faces and get thrown out. The robot who talks to you throughout the game also has some decent humor as well. 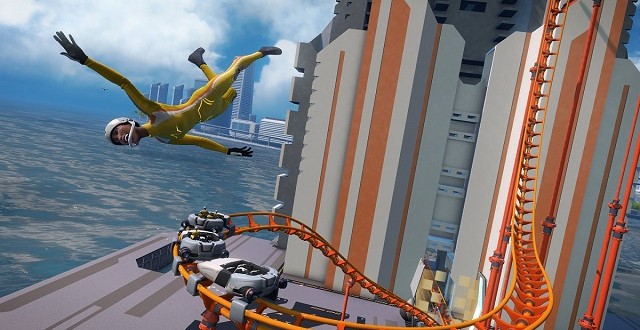 Screamride does a good amount of things correctly, but the things that are wrong are things that the developers of RollerCoaster Tycoon should have done properly. It isn't the worst game to come out and if you keep RollerCoaster Tycoon out of your mind then Screamride may be worth your money and time, but sadly as a person who grew up with the games I can't ignore or forget them. Screamride is full of potential, but it stalls on its way to the top.

Christopher is a Contributor at Load The Game and a Community Manager for Project Extract. If he isn't writing about games or playing games, then he's more than likely thinking about, you guessed it, games. Christopher prefers RPGs over all, but isn't opposed to jumping in to just about anything.
@Reaperchris13
Previous Xperia Z3, Xperia Z2 Android update rolling out on Monday
Next First Impressions: Ori and the Blind Forest