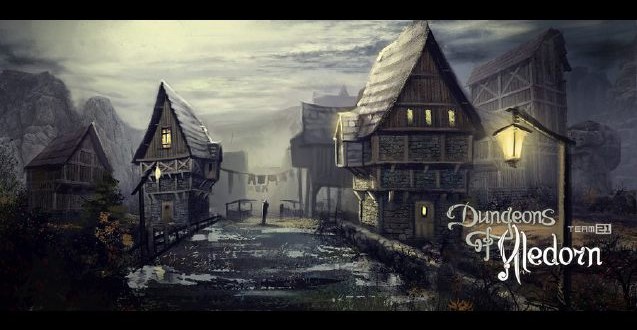 Today’s Greenlight exploration left me feeling a bit depressed. Many of the games that were popping up in my queue were bleak and uninspired copies of ideas I had seen executed dozens of times. It was a treat to stumble across the Greenlight page for Dungeons of Aledorn. Described by the developers, Team 21, as a “spiritual successor to old school hardcore RPG masterpieces”, Dungeons of Aledorn caught my eye based on it’s solid visual style, and it’s use of three separate gameplay modes. The three gameplay modes that are described on the Greenlight page are the exploration of the world itself, which takes place during non-combat situations and occurs from a first-person perspective. In this mode, you will be speaking to NPCs, looting items and searching for secrets. The second mode that they described is coined as the traveling mode, which is a separate user interface that will pop up to guide you between major locations. Team 21 claims that this will be used to prevent the typical filler content that is shoved into most RPGs when traveling between major quest hubs. During the traveling mode, you have the ability to camp, where you can assign actions to your characters which will affect their stats and abilities.  Finally, we have the combat mode, which takes place from an isometric perspective and is described as being extremely challenging, yet fair as well.

On top of the three gameplay modes that Dungeons of Aledorn features, we can also expect to be able to customize our party, including various choices of race and class. The game boasts nine races and six classes in all, as well as the ability to create your own class. Dungeons of Aledorn promises to have branching dialogue with NPCs, as well as a complex question system where quests will have multiple outcomes depending on player choice. DoA’s overall gameplay consists of solving puzzles, questing, speaking to NPCs, and participating in tactical, challenging turn-based combat scenarios.

Classic RPGs are one of the staples of gaming, especially when it comes to PC. Many of us grew up playing games such as Baldur’s Gate, Planescape Torment, Betrayal at Krondor, and the Might and Magic series. Dungeons of Aledorn has an ambitious concept on their hands, and have a lot to live up to if they want to hold a candle to the RPGs of old. However, from what they’ve described in their feature list and shown in their trailers, Team 21 seems to not only have a grasp on what it takes to make a good RPG, but also are adding some fresh twists to the genre. If you’re interesting in giving Dungeons of Aledorn a look, check them out on Greenlight and consider leaving a positive vote and some constructive feedback in the comments section. Also, they are on Kickstarter, and have received over $9,000 so far of their $60,000 goal, with 26 days left to go at the time of this article. You can find Dungeons of Aledorn’s official site at this link as well. Dungeon’s of Aledorn looks to be a very promising RPG in the likeness of some of the old classics, and that is why I feel it deserves your attention on Greenlight. What are some other Greenlight games on your radars lately?

I enjoy playing pretty much any type of game out there. My passion lies in finding the gems of the indie gaming world. When I'm not playing games, I'm programming them, at the gym, or tending to my small army of cats. Writing has always been a part of my life and I'm grateful for the opportunity to get my content out there for people to see.
@spf0227
Previous 5 Indie Games You Can’t Afford to Miss
Next SecuTablet equals Samsung and BlackBerry teaming up