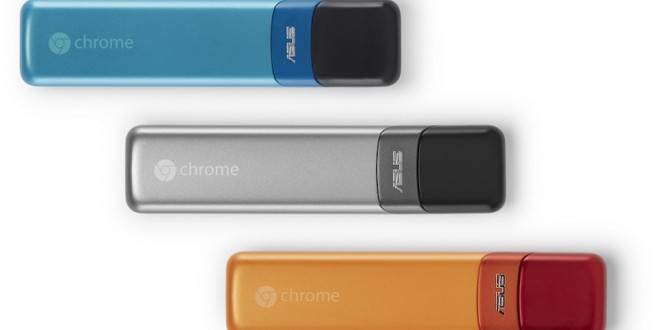 That's the Chromebit, but there's also a Chromebook Flip below

Asus and Google have teamed up to celebrate April Fools’ Day with a rather unusual announcement: new Chrome OS devices. It seems that Google has a lot of confidence in Chrome OS, even though user reviews aren’t exactly over the top on the positive side. Chrome OS is not bad, but it’s definitely a niche software, made for those who are mostly web surfers and social media buffs. Asus and Google today unveiled a new Chromebook Flip, the first truly convertible Google device, as well as the new Chromebit, a software stick.

First off, Chromebit is rather interesting as it is not much more than a USB stick-like device that houses an entire Chrome OS which you can then use with any TV or monitor that has an HDMI port in order to transform it into your own netbook. Although this is not new technology, seeing as mini PCs from Intel and others have been on the market for long, not to mention the Raspberry Pi and Pi 2, which are, granted, a bit more advanced. Nonetheless, the Chromebit is the first truly portable Chrome OS device that you don’t even need a special bag for, as it can almost fit in a standard wallet. If your interest has piqued, the small stick Chromebit price is $100.

The Chromebook Flip can be used in two different modes, which means that you can either use it as a laptop, or as a tablet. You can still benefit from the tent mode and such, which is neat as it comes with its own kickstand to top it off. Google and Asus are marketing this Chromebook Flip towards students and light users, as Chrome OS would not be fit for convertible fans with an affinity for the Microsoft Surface Pro 3 for example.

The Chromebook Flip price is set at $250, which is rather affordable for a convertible, but a bit on the expensive side for something with Chrome OS on board. We’re not sure if there are major differences between the Touch interface and the laptop interface, if any at all, but we’ll cover those as soon as we get our hands on a unit, soon enough. According to Google, the Chromebook Flip has a great keyboard, but we’re going to have to put that to the test. The company says that both the Chromebook and Chromebit will be launched later in the Summer, with no precise release date announced.

If you’re a buff for specs, let’s see what we can find out about these new devices. The Chromebit from Asus comes with a Rockchip 3288 CPU, 2 GB RAM, 16 GB internal storage, one USB 2.0 port, Bluetooth and Wi-Fi. That’s actually not bad for such a small device that can instantly turn a monitor into a computer, albeit a rather basic one. Also, it’s a convenient choice that Google put USB 2.0 instead of 3.0 or USB Type C port, as many students or lower-income persons might not have found the means to upgrade their peripherals and other hardware to the new ports.

As for the Chromebook Flip, specs include the same Rockchip 3228 processor, 2 GB RAM with 16 GB eMMC storage or you can opt for 4 GB RAM and 16 GB SSD storage. The battery life is supposedly up to 10 hours, which sounds rather appealing. The screen measures 10.1 inches, although we’re not clear on resolution right now. It gets a 720p HD camera on the rear, Wi-Fi, two USB 2.0 ports, an SD card reader, headphone and mic port and an HDMI port. Not too impressive, but for $250, it’s actually a fair deal, after all. What do you think about the new Chromebook Flip and Chromebit from Asus?

My life-long dream has been to test out every gadget on the market! Considering the fact that I've rapidly destroyed almost every gadget I've had so far, I'm not inclined to owning something, so my ideal outcome would be to have a different gadget each month. I'm really into smartphones, wearables and tablets and I love Playstation and Xbox, I'm sure I'll beat you at your own game (after a month of training... or two)
Previous Original Xbox supposed to be free, Nintendo should have been Microsoft
Next Steam Greenlight Spotlight: Yasai Ninja