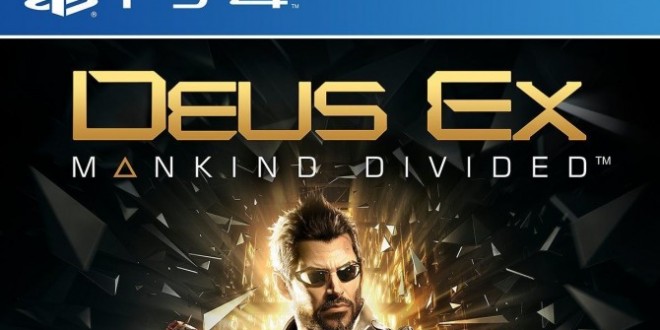 Yesterday, Jean-Francois Dugas, Executive Game Director at Eidos-Montréal confirmed that Deus Ex: Mankind Divided, sequel to the critically acclaimed 2011 game Deus Ex: Human Revolution, is on its way and treated us to some CGI action! Jean-Francois has also shared the final box art for the game on his twitter.

For those who are in doubt, yes, this is the final game's box cover. pic.twitter.com/bJDmCNPi1P

The game’s official announcement was made on Playstation.Blog, however it has been confirmed to be in development for XBOX ONE and PC as well as PS4. There is currently no word on a WiiU version, which may be a result of the lower sales of the previous game on WiiU compared to the PS3 and 360 versions. However the WiiU sold nearly a million copies and was released two years later and so lower sales are to be expected. This appears to be following a trend of Nintendo’s console getting overlooked for third party, multi-platform games and perhaps has more to do with its hardware being the weakest console this generation, or Nintendo’s younger demography. There is currently no release date announced, and anything could happen from now until the release and we may still hear about a WiiU version.

Deus Ex: Mankind Divided’s reveal was perhaps less of a surprise for some gamers, as several screenshots and concept artwork were leaked to a Russian website days before the official confirmation was made. These images indicate that we’ll see the return of the first-person camera view mixed with third-person-cover gameplay as seen in Human Revolution, as well as similarly futuristic, industrial environments.

Prior to the reveal, Square Enix shared a few teases on their Twitter but, judging by the responses, these teases seem to have caused more irritation than excitement.

New encrypted file from #CantKillProgress. Decide what happens next and find more at http://t.co/iprLp7c0qY pic.twitter.com/SwRSF0tKwO

Nonetheless the game trailer seems to have generated overwhelming positivity and hype, and we will see if this can be maintained when we get some gameplay footage and a set release date.

Steve belongs to a species of gamer whose natural habitat is England. He is a rare animal that is most commonly found hibernating in front of a tv with a controller in his hand. Occasionally he is spotted at the pub with the rest of his pack (he's definitely the alpha male). He makes growling noises while playing guitar, to show dominance. He's a dangerous mammal that will rip a game to shreds if it rubs him the wrong way, but he's a lovable creature at heart that likes hugs and pizza.
@acraftyape
Previous Create a bracket for Blizzard’s Heroes of the Dorm tournament and win prizes
Next Galaxy Note 5 display said to be UHD and dual-edge