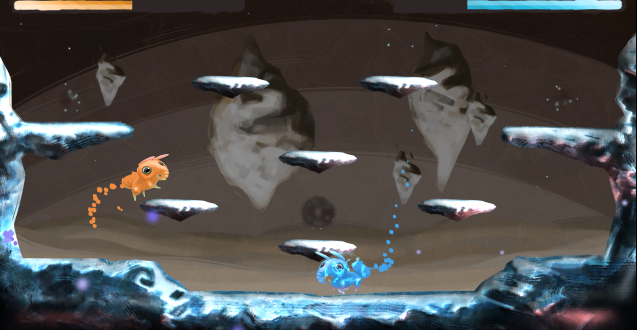 Today’s spotlight shines on Volphant, which is a game that was created originally for Global Game Jam 2015. After literally two days of nothing on Greenlight, it was nice to see a game that I feel really had some potential. Typically, I can find at least one interesting title a day on Greenlight, but the last few have been extremely brutal and left me longing for some interesting uploads. Thankfully, Volphant appeared today and caught my eye based on it’s cute, elephant/fox-like character and its promise of having you yell into your microphone to charge abilities.

Volphant is a game that is meant to be played in local multiplayer, in one of two formats: You can either play a 1v1, or a 2v2. Each match takes place in a fairly small arena, and tasks the players with collecting various runes and power-ups, which can then be charged to unleash deadly attacks. This is where the game gets interesting or hilarious, depending on how you see it, as it forces you to shout into your microphone in order to charge your abilities and attack the other player(s). I find this mechanic to be very interesting, especially since the game can be played only in local multiplayer (at this point in time). I can only imagine the laughs to be had when you are in a room filled with screaming friends trying to destroy the other person’s Volphant. Interestingly enough, in the 2v2 mode, the game requires you to sync up with your partner in order to charge your abilities, which definitely adds a nice element of teamwork and will do well to create some interesting experiences.

While Volphant is extremely simple in terms of its mechanics, I feel that the game still has the potential to provide a fun multiplayer experience, and that is something that we can never have too many of. The developer has stated that the price of the game will be relatively low based on the fact that the game does not have online multiplayer. However, it has also been said that if the game reaches a moderate level of success, and the community is interested, that they will strongly consider adding servers to Volphant so it can be played with friends over the internet. Volphant is overall a very nice-looking game artistically, and features the shouting mechanic which I am very intrigued to see in action. As I always say, innovation in games is key to keeping the industry moving, and I have to give Volphant credit for trying to come up with some new ideas.

If you are interested in having a look at Volphant, or if you just enjoy yelling in a room with your friends, then by all means visit their Greenlight page and leave a vote. If you dislike the game, be sure to provide some feedback on why you feel that way, as it will allow them to make improvements on their game. Constructive criticism is a key part of any development process, so don’t be afraid to speak your mind.

I enjoy playing pretty much any type of game out there. My passion lies in finding the gems of the indie gaming world. When I'm not playing games, I'm programming them, at the gym, or tending to my small army of cats. Writing has always been a part of my life and I'm grateful for the opportunity to get my content out there for people to see.
@spf0227
Previous Daniel Radcliffe to star in upcoming GTA drama
Next Itchi.Oh, No! – Blabbelogue