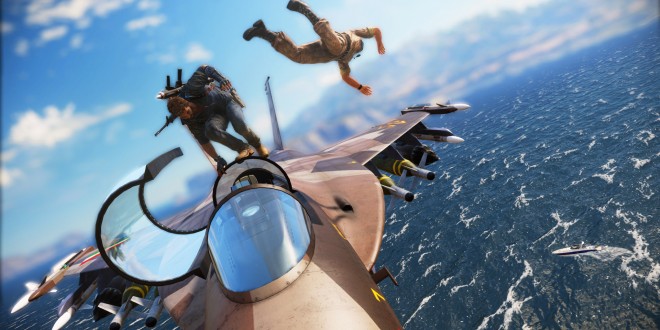 The new trailer for Just Cause 3 has been recently revealed, and if you haven’t seen it yet, you can watch it below. According to the Just Cause Facebook page, this trailer features, “No cut scenes, no scripts, no staging. Just gameplay and great camera angles.” So as you can expect, the game-play is light on narrative and heavy on action…but then again, it is Just Cause.

It is the third game in the series, each developed by Avalanche Studios, who truly are showing themselves as a force to be reckoned with in the sandbox genre. Even the first game in 2009, boasted a massive open world, almost 400 square miles in size, and they achieved this on the Playstation 2 no less! The second game took it up, not just a notch, but several notches, with stunning visuals and a wacky physics engine, unbelievable new grapple abilities, and of course, ridiculous destruction, albeit in a similarly sized world to the first game!

However, this new trailer has me somewhat concerned. While it certainly presents a clear improvement in visual quality over the last game and a welcome redesign of our hero, Rico Rodriguez, as well as a new location; the island of Medici (eerily around the same size as the last two Just Cause islands), the trailer itself could easily have been used for the second game. There is very little here that we can point at and say “this looks new”. There are certainly areas that we can clearly see have been refined and re-worked, but where are the new ideas?

There are the explosions, the destructive surroundings, the grand assortment of vehicles, the stunts, the dense fields of flowers, the grappling hook, the tropical paradise… all of these are welcome, but we have already experienced these things before. The only major difference is now Rico has a wing-suit, which should hopefully provide an interesting new dynamic, but the trailer provides only a short glimpse of it, in free-falling no less, where we cannot see the advantage it may bring. 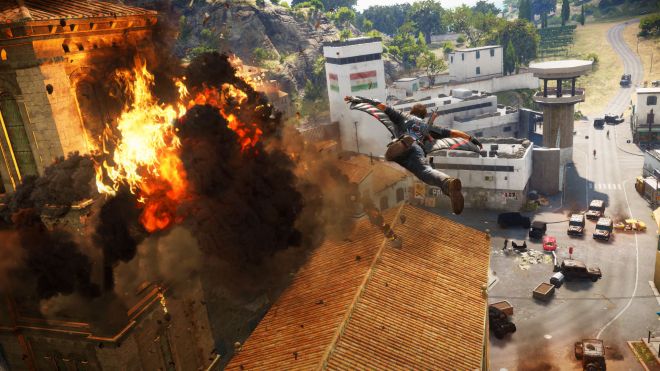 In fact, the trailer also fails to show the new inclusion of subterranean environments that were announced, and I am curious as to how the fast-paced, crazy, vertical gameplay dynamic will translate in these cavernous locations. Still, we are a fairly long way off release, with it not launching until the holidays this year. This gives Avalanche a fair bit of time to work a few things out and eventually bring us another trailer, hopefully revealing a little bit more of what’s new.

In February I messaged the official Just Cause facebook page, asking about whether the new game will feature interior environments, say, petrol stations or shops, akin to Grand Theft Auto, Saints Row or Watch Dogs…something that was absent in the previous Just Cause games. They responded, “I know it sounds great but it’s not the plan. We try to get players outside to use Rico’s abilities to their full potential. Having the ability to go into a shop it’s not really what we are after.” I was disappointed to hear that Just Cause 3 will follow the trend of being an outdoors-only game, as being able to explore interior environments can contribute to a player’s immersion in an open world significantly. They added: “We will have interesting places for sure. So it won’t be the same thing over 400sq miles…we have brand new places that have not appeared anywhere before.”

I can assume that by “brand new places” they are referring to the aforementioned cavern environments, but perhaps there is more to see and do than we know so far. I have my fingers crossed that Avalanche use their remaining time until release to not only advance the gameplay, but also flesh out the world and make it rewarding to explore every nook, cranny, meadow, alley, peak, roof and cavern. They blew our minds last generation. Let’s hope they can do it again.

Steve belongs to a species of gamer whose natural habitat is England. He is a rare animal that is most commonly found hibernating in front of a tv with a controller in his hand. Occasionally he is spotted at the pub with the rest of his pack (he's definitely the alpha male). He makes growling noises while playing guitar, to show dominance. He's a dangerous mammal that will rip a game to shreds if it rubs him the wrong way, but he's a lovable creature at heart that likes hugs and pizza.
@acraftyape
Previous Black Ops III Reveal: A Titanfall Clone?
Next In Defense of Easy – Thoughts on Difficulty