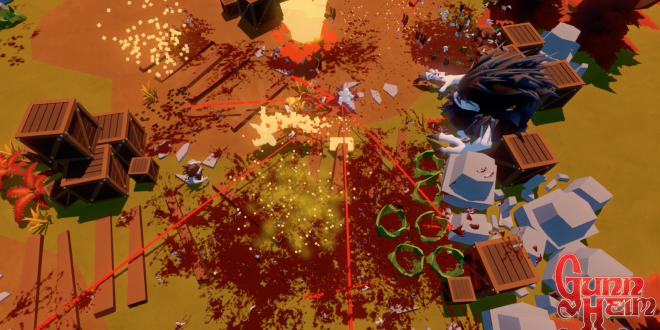 Today’s Greenlight spotlight is on Gunnheim, a top-down shooter with a strong focus on bringing back the classic fun of local multiplayer experiences. Unfortunately, in the age of internet and minimal face-to-face interaction, couch co-op is not even close to being as popular as it once was. However, I have seen a greater public outcry for local multiplayer recently, and we can only hope that this will convince more developers to add it into their games. While online multiplayer is fantastic, and mostly necessary in any game that is co-op, it’s always nice to have the option to play with friends who are sitting right next to you.

With a strong basis in Viking mythology, Gunnheim promises to provide a diverse collection of environments, characters, and enemies. You control a Gunnheim warrior who is tasked with cleaning up the unfortunate mess of the Lord of Death, who has been swimming in mead as of late. As his lackeys, you must destroy any inhabitants of Hell that have been set loose by the Lord’s negligence, and return balance to the world. 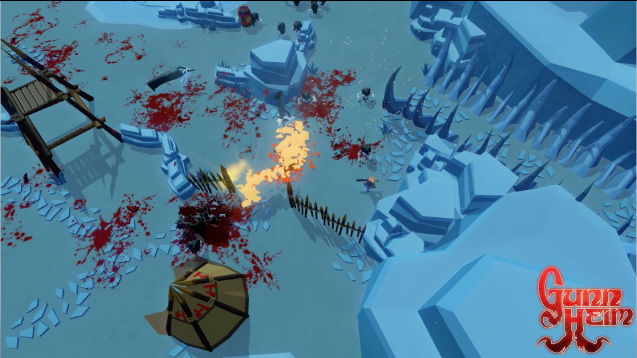 Gunnheim can be played solo, or with up to three other players in either local or online co-op. While the controls of the game aren’t mentioned on the Greenlight page, it seems as if it will be a dual-stick shooter, meaning that it will be best played with a gamepad if possible. Simply put, your time in Gunnheim will be spent killing everything in sight. If you’re expecting fleshed-out characters and a strong, meaningful narrative, then you are in the wrong place. If you’re looking for burly vikings who somehow have access to automatic firearms, then this is the game that you’ve been waiting for.

The progression system in Gunnheim takes place over various episodes, each with a boss to defeat before you can move on to the next. Defeating the bosses gives you temporary skill boosts, and completing episodes provides access to permanent unlocks (which are not specifically described, so I’m unsure about what type of stuff we’d be unlocking).

My favorite thing about Gunnheim is the silly way in which the Greenlight page is written. It is not, nor does it pretend to be a game with any narrative depth of any sort. Gunnheim takes every opportunity to poke fun at itself, while also praising the fact that the game features absurd amounts of gore, and most importantly, does not contain zombies of any sort (sigh of relief). To sum up what type of content we can expect from Gunnheim, I present you with this quote from their Greenlight description: “Feel like turning into a bear and dropping nukes?”. The developers obviously know what we want as gamers, and that’s just to have games that are fun. While in-depth strategy or narrative titles have their place, I always feel like there is nothing quite like a game that is just over-the-top and hilarious to play with friends. You can have a look for yourself if you head over to Gunnheim’s Greenlight page. Definitely think about leaving a vote and some constructive feedback, as it always is appreciated.

I enjoy playing pretty much any type of game out there. My passion lies in finding the gems of the indie gaming world. When I'm not playing games, I'm programming them, at the gym, or tending to my small army of cats. Writing has always been a part of my life and I'm grateful for the opportunity to get my content out there for people to see.
@spf0227
Previous The Sheltered Preview: Morals Versus Survival
Next Halo Tournament Cancelled? C’mon Microsoft