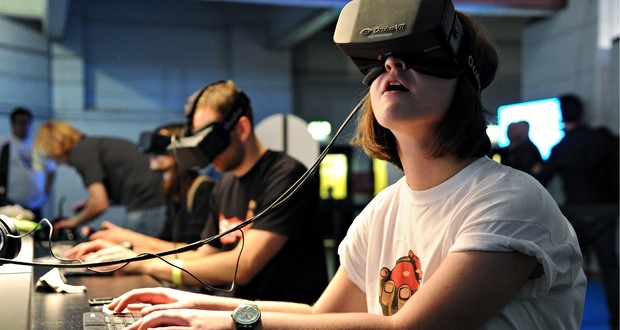 Their has been new news from Oculus announced on their blog about the Rift headset. Anyone who is excited about the upcoming flood of various VR headsets will be happy to know that the Rift has received a shipping date for sometime in the first quarter of 2016. The precise date is still unknown, but assuming there are no more delays then users should theoretically be able to get their hands on the Rift sometime early next year. Preorders will be available later this year; so, if you’re prepared to drop an unknown amount of cash, VR could be less than a year away for you. Oculus has also provided a glimpse of what the finished product will look like; images of the Rift, building upon the Crescent Bay prototype, were also released on their site. The new images do look a little more sleek and refined when compared to the original, boxy images on their website. But, this is all they were prepared to confirm for the moment. Further updates will follow in the weeks to come, hopefully filling in the gaps that have intentionally been left blank.

The shipping date is obviously a little vague, but it seems that it will be releasing around the same time as PS4’s Morpheus headset. It seems that next year is set is set to be the beginning of household VR. Unfortunately neither headset has received a fixed price as of yet. Tomsguide.com suggests that analysts don’t expect the Rift to cost any more than $500, but this is only speculation. The Oculus Dev Kit apparently costs around $350; so it would seem headsets are currently on track to set you back a little, should you wish to be one of the first adopters of VR. As new gear I wouldn’t expect the price, once it’s announced, to drop for awhile. It would also be nice to hear if the device will have external gear, like controllers, instead of relying on a keyboard and mouse.

Fortunately, Oculus Rift already has a list of compatible games and demos thanks to the early adoption of the Dev Kit among enthusiasts. As well as a series of currently unannounced made-for-VR games that Oculus hints at revealing sometime in the future. Oculus is certainly trying to make sure that its first adopters aren’t left with a fancy piece of tech with little to do with it. So, early adopters will have plenty of content to play around with until the new gear finds its way into most households.

Hi I'm Daniel and I'm an aspiring writer, avid gamer, and wanna-be cook; I'm not quite certain in which order. I like all things RPG and if that means swords n' spells, all the better. But, provided it has a good story I'll probably want to try it regardless of what it is. I'm a Windows junkie, and I spend my time gaming on Xbox, PC, and my 2DS.
@@danielcooper179
Previous Destiny’s Prison of Elders: Details revealed for upcoming House of Wolves expansion
Next Star Wars Battlefront: What We Know So Far