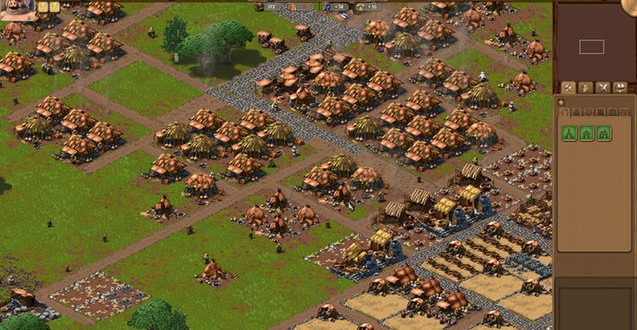 City-building games were a staple of my youth. From games like Emperor: Rise of the Middle Kingdom to Zeus to Caesar 3, I spent hundreds of hours building cities and watching them fail during my youth. The city-builders of today have unfortunately not had that same effect on me, and left me with no desire to revisit them once I completed a session. This is why it was an extreme delight to see a game like Ymir pop up on Steam Greenlight today. Combining a 4X multiplayer strategy mechanic with the city-building mechanics that we all know and love, the game aims to provide an in-depth and entertaining strategy experience.

Ymir is divided into two separate interfaces which are the world view and the region view. Each tile in the world view represents a procedurally generated area that you can explore and settle in. Located in each area are randomized resources, such as ores, animals, and vegetation, which will all be unique to each area depending on how it is generated. Ymir’s premise is that you are in control of a civilization of pigmen. Beginning in the stone age, you must work your way through the ages to establish a thriving and successful civilization.

With no direct control over your population or economy, Ymir uses simulation to generate statistics that control how the population reproduces, spends, and works. This mechanic, while definitely interesting, makes me wonder how unfair the game could potentially get if a player were to get an exceptionally terrible roll of the dice. The population is divided based on their social class, each with their own power and incomes. The economic depth is a major focus of Ymir, which goes down to the smallest financial details in order to provide a realistic and challenging management experience. Everything that is done in your world will affect everything else in some way, which can often be frustrating. While I feel that I would find this to be a bit unfair, I understand what they are trying to accomplish, and thus I feel that this simulation style is enough to justify somewhat silly mechanics.

On a happier note, controlling a civilization of pigmen sounds like a lot of fun. Who doesn’t love pigs? They seem like such hard-working animals. Ymir definitely seems like a strategy game for the hardcore crowd with its realistic mechanics and unforgiving procedural generation. Making one small mistake could potentially ruin your civilization, and if you’re someone who is into the risk-reward sort of mechanic, then this is the game for you. Grabbing a few friends and getting involved in a game spanning several days sounds like a good time, and will most likely end up in some sort of swine genocide. With this in mind, it is easy to say that Ymir is an interesting game, and I look forward to seeing it in action in the future.

I enjoy playing pretty much any type of game out there. My passion lies in finding the gems of the indie gaming world. When I'm not playing games, I'm programming them, at the gym, or tending to my small army of cats. Writing has always been a part of my life and I'm grateful for the opportunity to get my content out there for people to see.
@spf0227
Previous Steam Greenlight Spotlight: Guardians of the Forest
Next Steam Greenlight Spotlight: Viridi