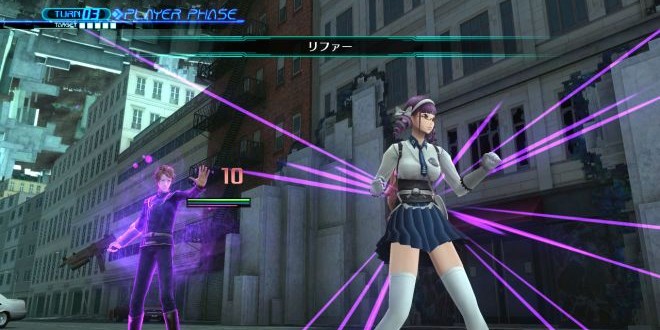 Lost Dimension is a sci-fi tactical RPG set to hit PlayStation 3 and PlayStation Vita on July 28, 2015. The game was developed by Lancarse, and will be published in North America by Atlus.

Today, Atlus published a press release that revealed a lot of new details about Lost Dimension. First, a brand new trailer for the game was released. The trailer highlights Sho Kasugai, Yoko Tachibana, and Toya Olivert. Sho has the power of “vision,” Yoko has the power of telepathy, and Toya has the power of magnetism. The three are members of S.E.A.L.E.D., a group of psychics tasked with saving the world by ascending a mysterious tower from another dimension called the “Pillar” to kill a man who calls himself “The End.” The team has thirteen days to complete their task.

Things aren’t as simple as climbing a tower and fighting an enemy, though. “The End” has revealed that there are traitors in your party – five, to be exact. At the end of each floor of the “Pillar,” the party takes a vote and erases an agreed-upon traitor from existence. This adds a whole new level of strategy and mystery to the tactical RPG. To make things even crazier, the traitors are chosen at random every time you play the game, so the tension doesn’t end after one playthrough. The choices made on each floor change the course of the story and the ending.

When Lost Dimension launches on July 28, players will have two weeks to download $20 of DLC for free through the PlayStation Network. This DLC includes nine character costumes (purely cosmetic), twelve PSN avatars, a map pack with additional story content, and three DLC quest sets that will allow players to unlock exclusive items and character bonuses. The map pack, called “The Beginning of the End” features a separate story from the main plot that takes place in a different locale. The pack will include five missions that explore the origins of the “Pillar” and the history of the eleven heroes featured in the game.

Additional DLC will be available for purchase as well. Helper items ($0.49-$0.99) can raise experience, money, and boost stats before a battle. Status boosters ($0.49-$2.99) can increase “vision points,” restore SAN (sanity, which characters need to use skills), and can even level up all of your characters simultaneously.

Lost Dimension is a sci-fi tactical RPG where anyone could be your enemy and nobody is safe. Are you going to check it out on your PS3 or PS Vita? Let us know in the comments, and keep checking back with Load The Game for the latest gaming news.

I'm Aria! When I'm not doing other things, I'm either playing video games or writing about them. If you like games, anime, and random stuff, you can follow me on Twitter @Sage0fForest
@@Sage0fForest
Previous Second Rocket League Beta Announced
Next Beginning of the End for Last-Gen Consoles?