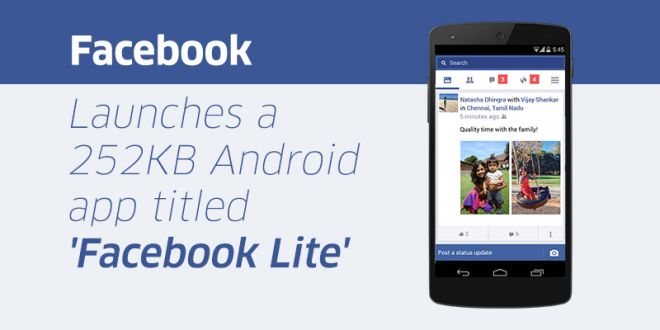 Today the largest social media company in the world has just made another step forward with the announcement of Facebook Lite. This application, only available for Android, takes the Facebook experience and cuts it down to its most essential key points, so as to diminish the amount of data being used. The idea of Facebook Lite is not only helpful to save data for those on tight plans or anyone else who is looking to save data, but it also is affective in bringing Android users the Facebook experience when they have very weak Internet access or are under a slow network.

Even the application itself is very small. To download it is less than 1MB. With that, you know it is a very quick download and installing process. Unfortunately, not everyone will be able to download it right away, as its availability is only launching is certain countries in Asia today. It was stated by the social media titan that in the next few weeks Facebook Lite would make its way to people of Europe, Africa, and Latin America. No word yet on its coming to North America, but one can only speculate that if successful in other parts of the world that it is more than likely to make its way there.

One might also wonder if Facebook Lite will become available for other operating systems besides Android. Once again, depending on its success, it seems very plausible. As the app spreads across the world in the upcoming months we will gain new information and hopefully have more answers.